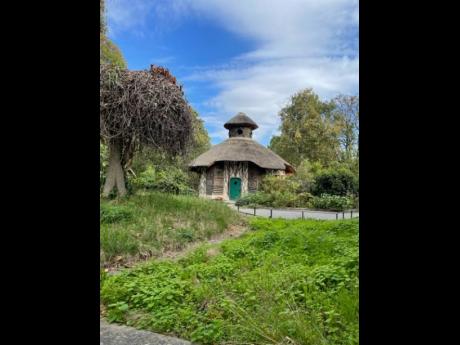 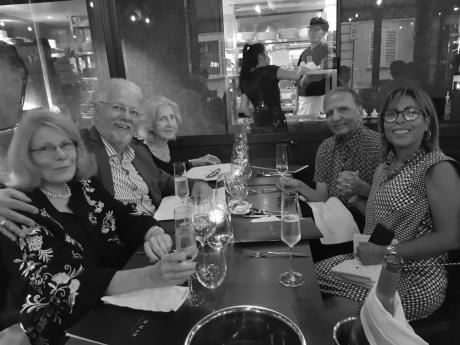 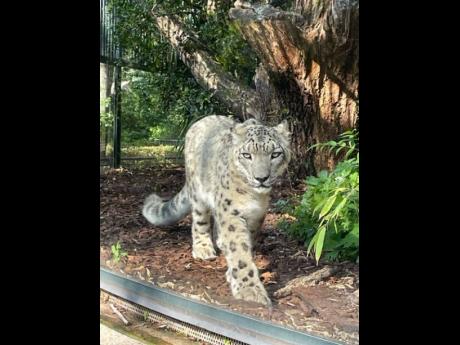 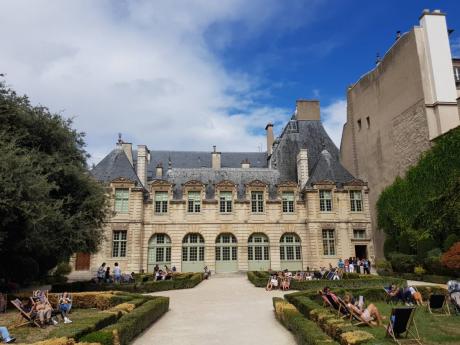 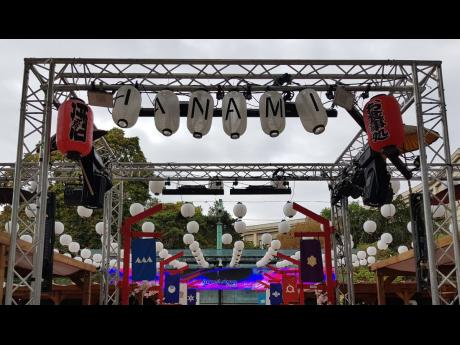 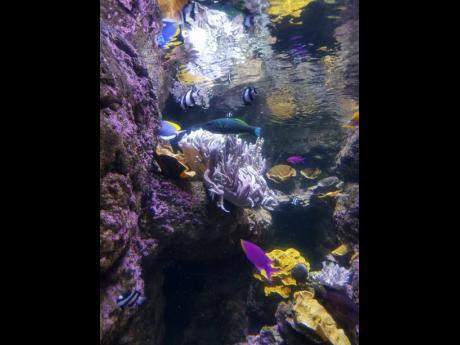 L’Horizon de Khéops was unlike any other experience in my life. Fitted with goggles that had earphones and a pack back that embraced both arms, suddenly I was no longer standing in a vast hall at the l’Institut du Monde Arabe (IMA), instead, a truly lifelike Egyptian guide directed my two friends and me to stay inside the blue light lines on the floor, not to go beyond the red lighted grills at the side or floor markings and to walk towards the path with a column of light.

Suddenly a lavender blue horizon beyond a desert and city lights gave way to Khufu’s pyramid. Watch out: a huge block of stone comes hurtling down a chute as now we’re inside the pyramid watching construction taking place 2,600 years ago.

Keep moving, keep following the guide and now a gorgeous large cat with a jewelled collar guides us. Watch out for the step. I can’t move anymore I’m so afraid of falling. My friend, just an outline of white light with her name above her head, had to step in front and told me to shuffle my feet and slide them along the floor because the step is an optical illusion.

It’s real, so real that our third member couldn’t continue and was led away. Arriving at the top of the pyramid with all the city beneath, with a horizon of blue and sand, on the edge of magnificence, which will kill us if we tumbled off, is absolutely mind-blowing. I could go on about the ceremony where the Pharoah’s body is prepared, where the barge takes us away to the afterlife, but all I can say is if ever you got the opportunity to take such an immersive trip, do so unless you suffer from vertigo.

Founded in 1980 by 18 Middle Eastern and African countries with France, in a building designed by famed architect Jean Nouvel, the fourth and seventh floors of IMA hold works of Arabic art and culture while le Zyriab restaurant on the ninth floor, with a lovely view of Notre Dame Cathedral, is to reopen when refurbishing finishes year-end.

Nearby we also visited the Ménagerie du Jardin des Plantes, French for the Zoo in the Botanical Gardens. Opened in 1794, this is considered the oldest zoo in the world and participates in 55 programmes to preserve the genetic diversity of species. Beautifully landscaped, only the Snow Leopard looks distinctly uncomfortable away from its Siberian or Himalayan mountain home. The Red Panda, a small mammal native to the Himalayas and southwest China, is adorable with reddish-brown fur, white-lined ears, a black belly, and legs with a white muzzle and ringed tail.

And why the Wallabies don’t jump over the wire fence I have no idea, but they are easily observed amid their greenery. Another must-see is the National Museum of Natural History, also within the Jardin des Plantes, but by now we needed to stop for lunch and chose the nearby La Table d’Hami, a small Korean family-owned-and-run café.

Usually, my time in Paris is spent in museums and art galleries, but I was determined to visit places I’d never been before despite having once lived in the city, hence the IMA and Zoo. So to finish off the unusual, our friends suggested the Aquarium de Paris near Palais de Chaillot.

We left the left bank of the Seine to cross over the river driving north to see the cone-shaped Basilica of Sacré Coeur de Montmartre, gleaming on the Butte. We’re travelling with Shahin Akhavi, an Iranian Frenchman who operates “Paris luxury tours”. He told us that it was the calcite in the travertine stone which kept Sacré Coeur forever white.

Traffic became incredibly dense, and many African restaurants and clothing stores passed by; soon the streets were clogged with tourists visiting the Basilica so we were glad that we only want a glimpse before heading back to the Aquarium. But, en route, Shahin takes us to Hotel de Sully by the Place des Vosges, once the Place Royale. We saw brick walls and freestone framed doors and windows in the style of King Louis XIII, but Hotel de Sully, built by the first Duc de Sully, is a classical composition of more costly freestone. We saw a number of these aristocratic mansions dating from the beginning of the 17th century in the Marais district. What sets this apart is that the Centre des Monuments Nationaux in 2000 made Hotel de Sully part of the Ministry of Culture and Communications which manages over 100 of France’s most prestigious national monuments. Their bookstore and gift shop are of real interest.

Finally, we reached the Aquarium and were greeted with an entrance festooned with Japanese hanging paper décor. Although not as spectacular as the aquarium in Baltimore, the Parisienne one is well attended with families and children having a glorious time viewing multi-coloured fish and some really creepy slithering giant eels or snakes whose photos I won’t even share with you. But the experience was delightful, so we’re glad to have seen some unusual parts of Parisienne life!

What could be better than having dinner with former French Ambassador to Jamaica H.E. Jean-Michel Despax and his talented wife Line who gifts us with two exquisite porcelain cups and saucers from a recent exhibition of her ceramics. Thai Restaurant Moom Mam is the perfect place for our reunion from which they send greetings to their many friends in Jamaica.