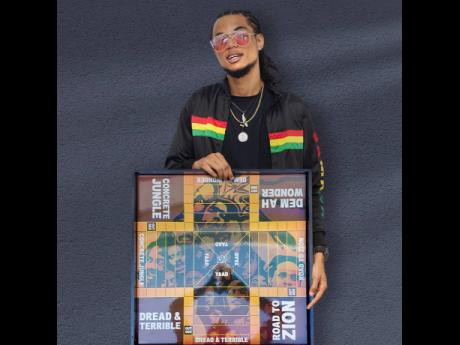 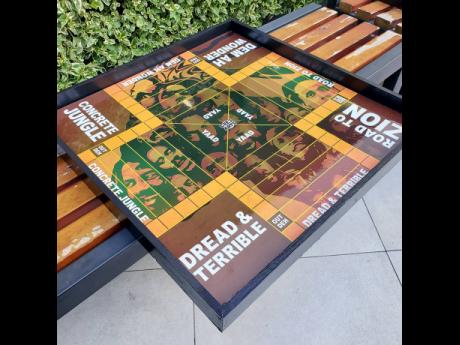 Contributed
A closer look at the Reggae Kings ludo board. 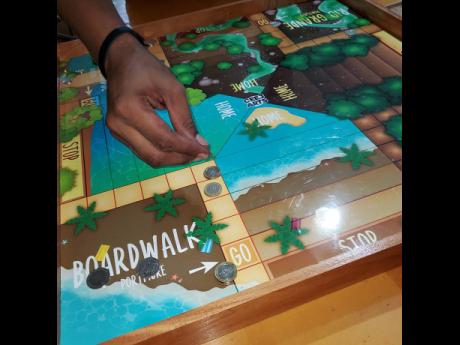 Contributed
Game lovers making a move on the Island Vibes ludo board.
1
2
3

The adrenaline rush of staring down your opponents, while you make your way to victory, is the most exhilarating and rewarding feeling. Who says all the fun and games must stop once you become an adult? CeejArts is bringing the excitement of the culture to your doorsteps with custom-designed games for family and friends.

“I have two Ludo [board] designs in my collection at the moment, Island Vibes and Reggae Kings. I also have a third design that’s a collaboration with Dubwise Cafe,” artist Cee Jay Carpio told Living.

Carpio explained that he had always been a big fan of games. He recalled the pastime playing an important role in his childhood. “I’ve always wanted to become a game designer growing up and make my own game. That was my dream job. These days though, it’s more of a dream goal,” he said.

As a ‘90s baby, he was in the era of home consoles. And he was fascinated by the Nintendo 64. Seeing Mario for the first time, he was blown away by the colours, vibrancy, the world layout and the art style. Everything resonated form this interactive cartoon. He has had a unique love for video games ever since. But as a painter, Carpio began gravitating towards customising Jamaican classic board games. And it was there that CeejArts Games was born.

“During the heights of COVID-19, my family and I ended up having a lot of game nights in lockdown. A thought came to me, and I ended up designing a snake and ladder board for the house, and everybody really liked it. But for me, it was just the catalyst to the bigger picture that I was yet to see,” he shared.

Soon after, Ludo entered the chat with his friend, Stephan. After the meeting, the moment of inspiration saw designs playing over in his mind. “After that, I decided that the next board I would do would be a ‘loodi’ board for myself, and that’s when I created the original Island Vibes design,” he added.

While creating that design, Carpio was sure he wanted the product to speak to Jamaica. “Not just through colours or association, but visually with different elements. I knew that I wanted to create something so different, yet so familiar,” he said.

The vision of the marketplace inspired the look and feel of the two to three-dimensional board.

Nothing beats your first. And while Reggae King is a brilliant board, Island Vibes is his first and favourite creation. “It’s the first-ever loodi board I made. Fun fact, the version of the board that I sell now isn’t even the version I did initially, so what persons are getting now is the update, which is better (laughs out loud), kinda like Island Vibes version 1.1. I’m a very sentimental person, so don’t be surprised if, in the distant future, it’s still my favourite,” he revealed.

With the great reception speaking volumes to the quality and vibes of the brand, Carpio hopes to continue on this creative stride, “I hope to become even more of a household name with the venture, bringing joy, fun and positivity to families and individuals here and abroad, upgrading the culture while maintaining its authenticity.”

He continued by highlighting, “I’m selling more than just a product; it’s culture. A cultural product made with precise craftsmanship and love. This is about the opportunity to show Jamaica and the world and pay homage to a product that we’ve all grown up with, loved and are so familiar with in a new light, new way and new feel.”

As the world gets more technologically advanced, causing isolation in the process, Carpio believes that these board games will bring families and friends together, creating a deeper and more meaningful bond.