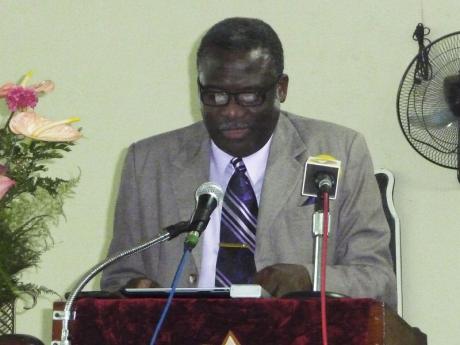 WESTERN BUREAU:THE JAMAICA Umbrella Group of Churches (JUGC) is calling on the Government to ensure that the flexi-work week legislation includes a clause protecting the right of the worshipper in the workplace from discrimination.

This call comes against the background of the submission of a seven-point proposal by the group to Labour Minister Derrick Kellier, asking that the matter to be taken to Cabinet.

Chairman of the umbrella group, the Reverend Conrad Pitkin, made the call while addressing the installation service of the executive of the St James Minister Fraternal at the Montego Bay New Testament Church of God earlier this week.

"We want something in the legislation, and we have been assured by the (labour) minister that efforts would be made to have it there to protect the rights of the worshipper from discrimination at the workplace. We want some assurance where the decision on the worker rest day is concerned - it cannot be left to the employer to decide, and it cannot be left either to the signing of a contract," Pitkin indicated.

He said the position of the group is not adversarial, but that they are desirous of having dialogue with the Government on behalf of the Jamaican people, meaning not worshippers alone, but Jamaican workers on a whole who would be at a disadvantage.

"We know the Jamaican culture. We know how the Jamaica society operates. The average worker has 'no say' and so that must be taken into consideration," said Reverend Pitkin.

He said the group is also advocating for the recognition of a rest day as being a full 24-hour period and nothing less.

"We also want that 24-hour rest day to be a full 24-hour day, taking into consideration that Seventh-day Adventists do worship on a Saturday, and for them, 24 hours is crucial to their worship. That must be preserved. That must be recognised and respected by government and by employers," Reverend Pitkin told the gathering.

The proposed law, which was tabled in April, will do away with the two-day weekend, and will allow for all seven days of the week to be potential workdays. Under the new law, employees would still be entitled to two days off per week.

Reverend Pitkin also presided over the installation of the executives of the ministers fraternal, which will serve a two-year term between 2014 and 2016.