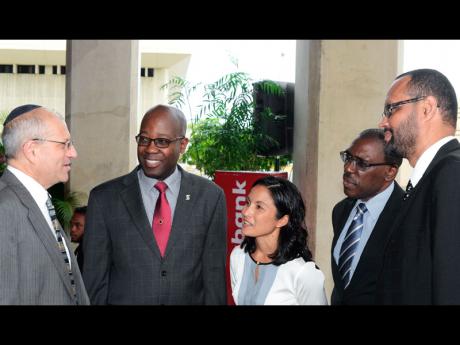 Scotiabank, which continues to celebrate 125 years of operations in Jamaica, last Thursday presented certificates of appreciation to representatives of four Corporate Area businesses, each of them having had at least a 50-year relationship with the bank.

The presentations took place at the King Street branch during a courtesy call by Scotiabank executives including Sylvia Chrominska, chair of Scotia Group Jamaica who is visiting from Canada.

Ena Wong Sam who opened a personal account in 1960 and whose company Ena Wong Sam Limited established a business relationship in 1995, made it clear that she satisfied with the service. She told The Gleaner: "Scotiabank is very efficient. When you get your statement you have nothing to worry about, no mistake. If they make a mistake, it correct same time."

Her company located at 6-8 Norman Road, is engaged in the distribution (wholesale/retail) of a wide range of confectionery items out of Thailand, Mexico, China, Dominica, Columbia and Brazil.

A very popular source for a wide range of scarce items, they are engaged in the import/ export, distribution and sale of dry goods including haberdashery/hardware supplies and general merchandise. The business is also known for its supply of bicycles and bicycle parts.

Now retired and acting as a consultant to Frater, Ennis and Gordon of which he is a founding member, a dapper attorney-at-law Eric Frater came to be recognised by the bank.

He opened a personal account in 1974 and went on to establish business relations in 1980. For the attorneys with offices at 21-23 Duke Street and the bank whose executive offices, corporate and commercial centre are located at the intersection of Duke and Port Royal streets, this has been a mutually beneficial relationship.

It was a proud Michael Abrahams who accepted on behalf of his late father, Edgar, who started E.W. Abrahams & Sons and opened his first account in 1953 to facilitate his trading business.

The company, which has offices at 35 Hagley Park Road, was incorporated in 1967 and has grown significantly under the stewardship of Michael who is managing director and his sister Jean Fraser, a director. Its flagship product is the Nadinola line of skin creams, which is manufactured locally at two locations - Kingston and St Thomas. The product is sold locally and also exported to some CARICOM members.

E.W. Abrahams & Sons also manufactures its own line of body wash, branded under the name SILKEN, and is made in Spain.