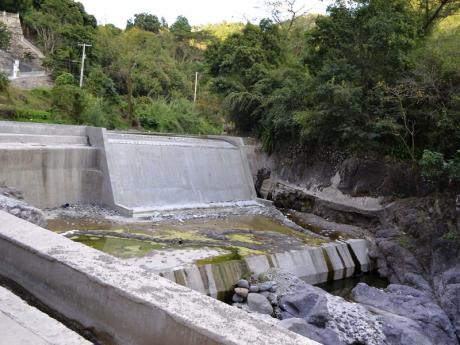 A dry Hope River during the dry season.

THE RAINS have returned, bringing with them relief from drought conditions that plagued the island during the summer, but Jamaicans must guard against a false sense of water security.

So says Director of the Climate Studies Group Mona Dr Michael Taylor, who is supported in his caution by Herbert Thomas, deputy managing director of the Water Resources Authority.

Taylor, a physicist, urges Jamaicans to be mindful not only of the El Niño phenomenon that promises a return to the dry spell towards the end of this year and into next year. They need, too, he warned, to be cognisant of climate change, which will see the island experiencing longer and more severe dry spells over the long term, as well as flooding incidents.

"As El Niño peaks, we might revert to dry conditions somewhere between the end of the year and early next year, but as it declines, we are susceptible to the reverse, which is flooding, when the early rainfall season kicks in," he said.

"So the point is, we have to figure out how to be resilient to these swings in extremes from drought to flood within the course of a year, and these kinds of swings will become more and more the norm under climate change," the scientist posited.

This is borne out by research done over the last two to three years by the Climate Studies Group for the Planning Institute of Jamaica.

That research, Taylor said, looks at climate scenarios up to 2040, with a focus on projections for temperature and rainfall.

"Rainfall will continue with this form of variability, which is a yearly swing between drought and flood conditions, but by 2040 will show the beginning of an overall long-term drying trend. This means that, from 2040 onward, even though we will get rain, we will get less overall rain," added Taylor.

The solution, he said, is a comprehensive look at water security, something Government is attempting to tackle, with work ongoing on a new water policy that takes account of climate impacts.

"We need to be concerned about water capture, water storage, water access, conservation, efficiency, and using science to help us to better plan for these kinds of extreme variations," the head of the physics department at the University of the West Indies said.

Thomas agreed, noting that the island's long-term water security will depend on a comprehensive plan, informed by the new water policy now nearing completion, and with both private citizens and Government working in concert.

"Some people like to stand under the shower and sing. Cutting out things like those [is important]; you would be surprised to know the amount of water you waste that way," he told The Gleaner recently.

In addition, Thomas said Jamaicans might have to look at retrofitting their homes and offices to include features such as low-flush toilets and faucets that use less water for showers. This, while the island looks at alternative energy sources in order to reduce the overall cost of getting water to the areas where it is needed.

Checks with communications manager at the National Water Commission, Charles Buchanan, revealed that current electricity cost for water stands at some of $500 million monthly.

Beyond that, Thomas said there is the need to look at rainwater harvesting and the comprehensive use of wastewater, to which the water policy also gives attention.

"For example, the treated sewage out at Soapberry, there is the thinking that some of the water could be used in St Catherine areas for agriculture and, therefore, the water normally used for agriculture could be freed up for domestic use in Kingston," he noted.

"And there are other things ... . You might have to consider a double-plumbing system so you separate grey water (water from bathroom sinks, tubs and washing machines, etc) from black water. Grey water you can use to flush toilets and water lawns," Thomas added.