Shedding light on a secret sect 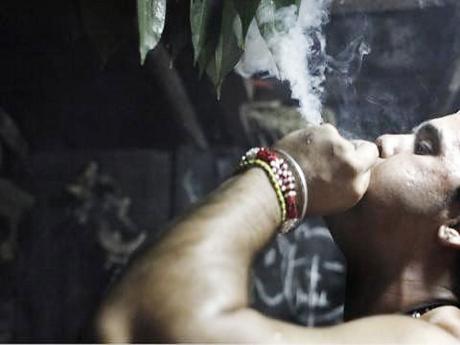 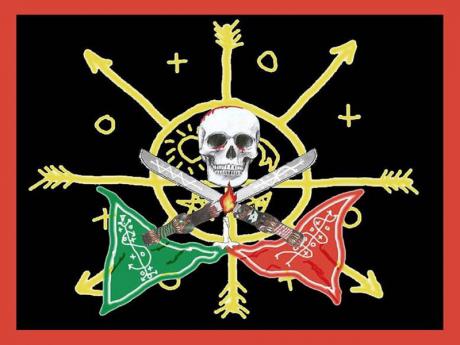 The scary-looking Palo Mayombe symbol. The skull represents the eternal spirit while the machetes represent the force of the universe. 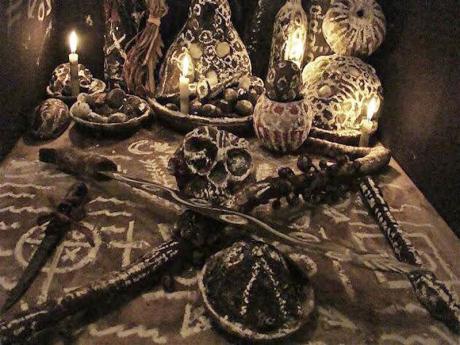 'Palo is the most feared black magic in the world'

In the mysterious, cryptic world of the occult, Palo Mayombe stands out. It's a faith noted for its secrecy, sheer energy, colour and mystical aura.

With origins in the Congo, Africa, this mystical religious practice was brought to the region by slaves who were forcibly uprooted from their homes and sent to Cuba.

There is an unmistakable fear that 'Palo' elicits. The tata or priest is said to hold the keys to the Cosmos, united with the myriad spirits that impact our lives.

Such an imperial and revered role has long been bestowed on Tata Dane Nsasi who carries the title Nfumo-Ngubula - Tata Nganga, the highest position attainable in Palo Mayombe.

The title was bestowed on him after he received all the initiations, training, secrets and ngangas (sacred altars) which are passed down from godparent to godchild. He explained the demands and expectations of the priest, emphasising the nurturing of initiates who study under his tutelage.

"The priest has to be versed in the songs (Mambos), prayers and herbs (Bikanda) to heal the sick. Daily, he must attend to the shrines called Ngangas of the Mpungo or deity. This is how we cultivate a close relationship with the spirit world."

A seasoned tata," he said, "is a master the arts of mediumship, spiritual workings and divination."

With over two decades in the religion, Tata Nsasi has schooled many apprentices. The initiation ceremony called Rayamiento is secretive and there was a limit to what he divulged. During the ritual the seeker is 'scratched' or initiated and given ancient tribal markings. It is there that an oath is made in blood before deities (Mpungo); ancestors (Bakulubambutu) that include the lineage of all deceased priests; house spirits (Nfumbe) who serve as intermediaries between the living and the dead; and the godfather or tata who is the initiate's counsel and guide through life.

Tata Nsasi admonished persons against leaving 'Palo' predicting catastrophic consequences if they do. His reasoning was provocative, even logical. "Remember, a blood oath was made. Blood is life, your life. To turn your back on such an oath is to reject yourself, your very life. Obviously, there will be a steep price to pay. No one leaves Palo Mayombe."

Marginalising Judeo-Christian doctrinal belief in a devil or evil, Tata Nsasi was unyielding. "We hold the existence of God in its truest sense. God or Nsambia and Kimpangulu are the original principles and creators of all life, but we do not give credence to a devil.

"We believe in the connectedness of all life, we hold sacred, light and darkness, each having its own particular spirits and mysteries. Even if there is sunlight, there is a shade. It is not for everyone to know the mysteries. This knowledge heals and pulls people from the grave when they are dying. Palo is also the most feared black magic in the world."

While in essence there are no devils in most African traditional religions, Tata Nsasi admitted that there are energies that create obstacles but argued that there are only instruments to ensure balance in a cosmic sense.

"There is light and darkness and both are essential for balance. Darkness is there to challenge and test humanity. But to ascribe evil signifies a failure to understand life and our mission here."

Interestingly, Tata Nsasi turned the Christian edict of "turn the other cheek" on its head, asserting that if wronged by another, we have a responsibility to balance the scale by retaliating in any way possible, including spiritually. In such scenarios, the Tata is readily sought.

Concise and authoritative, he articulated the history and lore of Palo Mayombe, decrying the ignorance of those who malign a religious and philosophical tradition that signalled the very origins of civilisation.

Archaeological findings, he said, bolster his theory that the Congolese, as the 'first people' with a supremely potent and mind bending religion.

"They were blessed with spiritual gifts from heaven (Nzulu) and earth (Ntoto). We are the first tribe. The Yakara or first man had his origins in the Congo."

Also called the 'Stick People,' he noted that, "trees in particular are very sacred to his people," although "everything is imbued with a spirit."

He recalled that sacred items were hidden and obfuscated from plantation owners and how a religion, once only practiced outdoors, was miniaturised and conceptualised by African slaves into one of the most secret mysterious societies in the world today. Today, many practitioners use their homes to pay obeisance and connect to the spirit world.

While Palo Mayombe shares the eastern doctrine of reincarnation, Tata Nsasi inveighs against observers who advance that 'Palo Mayombe' has started fusing elements of Christianity. He debunked this thesis, although he stated that one strain of the faith called 'Palo Kimbisa' has assumed Catholic attributes.

"Palo - Briyumba con Mayombe," he said, "has stronger earth-based leanings." Although he described 'Mayombe con Mayombe' as the original expression of the religion, he downplayed any fissure among the faithful. "We all attend each other ceremonies." He also dispelled any belief that 'Palo Mayombe' absorbed the Christian cross in its practice.

"This symbol was used some 3,000 years before Christianity. It was done by tying two sticks together and represented the cardinal points. It is a symbol of divine providence of Nsambia Mpungo (God) being in all directions and even in the air we breath."

And of many tatas who also initiate and practise Santeria/Lucumi - Yoruba faiths, he opined, "Slaves from the Congo and West African countries worked and were housed together. We are open about spirituality, tolerant people. Moreover, we recognise and believe in the spirits of other peoples, so it's not uncommon for us to embrace and practise the principles and rituals of other African-based religions.

Finally, he warned against charlatans who prey on the unsuspecting. "There are simple ways to verify the authenticity of those who call themselves tatas. You cannot initiate yourself or build your own ngangas (altars). It originates from another Tata Nganga and passed down from the original ancient lines of Palo Mayombe, before it is duplicated or built for the new initiated.

"You must come from a notable, traceable lineage that is connected to a particular tribe in the Congo and a specific location in Cuba where the tradition flourished. It's your spiritual fingerprint. It is disingenuous for someone who is simply 'scratched,' to claim titles and request money for so-called spiritual work.

"Only a genuine tata, who is comprehensively trained, surmounting every challenge, has a right to be revered and duly remunerated," said Tata Nsasi, who declined to be photographed because of the secrecy of his faith.

Dr Glenville Ashby is a social critic and president of Global Interfaith Council. Feedback: glenvilleashby@gmail.com or follow him on Twitter@glenvilleashby