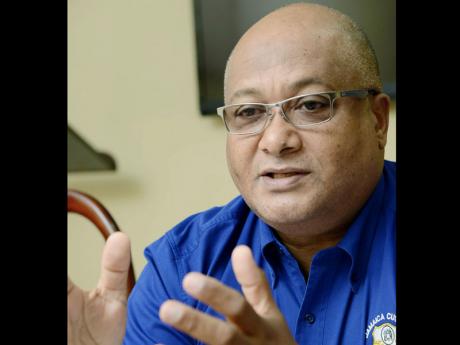 NEARLY TWO YEARS after a minibus was intercepted at one of the nation's ports with higher-than-normal radiation levels, the motor vehicle remains in Jamaica.

However, customs boss Major Richard Reese has insisted that Jamaicans have nothing to fear as the contaminated vehicle is being stored according to international best practices at a secure facility at the port.

Reese also revealed that the situation is being handled with assistance from the health ministry, the International Centre for Environmental and Nuclear Sciences (ICENS), based at the University of the West Indies, and the Bureau of Standards Jamaica.

"Where the vehicle is, it's not posing a danger to any individual because it is isolated from everybody," said Reese, the commissioner of customs.

"Based on the radiation level, it is a certain distance away so that it does not affect anyone. It's just sitting there waiting to be re-exported, and we are satisfied that there is no threat [to Jamaicans]," he added.

ICENS confirmed that it was contracted by the health ministry to test the vehicle and found that the radiation level was above what is normal in Jamaica.

The centre said those findings have been forwarded to the ministry and "it's for them now to make an assessment as to whether the thing is safe or not".

It was found to have elevated levels of radiation by Jamaican customs authorities who had ramped up the testing of shipments coming from Japan. This followed the magnitude nine earthquake that rocked the Asian country in 2011, triggering a tsunami that crippled the Fukushima nuclear plant.

But Reese said sending back the vehicle was proving to be a challenge that might require diplomatic assistance from the Jamaican Government and other countries.

At the centre of the problem, the customs boss said, is getting the company that originally exported the bus and the shipping line that brought it to Jamaica to agree to transport it back to Japan and mapping out a route for the contaminated cargo.

Noting that the shipping line is already aware that the vehicle has 'higher-than-normal levels' of radiation, he said the company now has to decide whether it is transported in a container as well as to weigh the risks involved.

He said the local used car dealer had already agreed to return the vehicle, but revealed that no agreement was in place with the exporter or any shipping line.

Coupled with that, Reese said the shipment might not sail directly to Japan.

"It may go through other jurisdictions, so you have to get those clearances. It means that the Ministry of Foreign Affairs and Foreign Trade would have to engage other missions to seek their assistance to have it returned," he told The Gleaner.