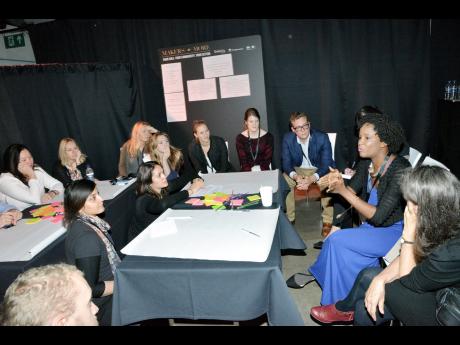 Norman Grindley/Chief Photographer Joan Webley (second right), founder of Nanook Enterprises Jamaica, clarifies some points for members of the her workshop following her presentation about her work at last Thursday's Arthur GuinnessProjects/Ashoka Changemakers Makers of More summit at The Oval Space in London, England. 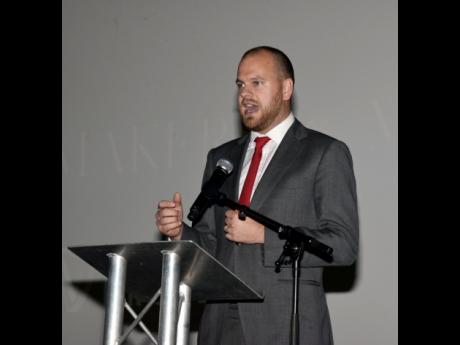 This year’s Arthur Guinness Projects/Ashoka Changemakers Makers of More Summit ended on a high note for social entrepreneurs at London’s Oval Space last Thursday night. Individuals or groups who have a project that will enhance their community will have the opportunity to win prizes totaling ¤50,000, which will be distributed amongst the winners, as decided by a panel of expert judges. Top prize will be ¤30,000, with second and third prize of ¤10,000 each.

Rob Wilson, director of Ashoka in London, made the announcement at the end of several workshops during which five individuals from Jamaica, Indonesia, England and Singapore showcased their projects and received valuable help to turn those projects into sustainable entrepreneurial ventures. Wilson told The Gleaner that The Makers of More Summit was a huge success and all at Ashoka were delighted.

“We had a fantastic attendance and the energy in the room was electric. Firstly, the speeches from the five Ashoka and the five Arthur Guinness Projects – supported social entrepreneurs left myself and everyone hugely inspired. Then the interactive workshops that followed gave us the practical skills and hands-on experience to appreciate that we, too, can be Makers of More, not just those onstage, “ Wilson said.

He also expressed delight that Ashoka stands alongside Arthur Guinness Projects and celebrates a successful four-year partnership which has benefitted more than 20 million lives around the world so far.

“We are even more excited, though, to be announcing the launch of the next phase, an international challenge prize to support changemakers around the world benefiting their communities.”

Makers of More: ‘Your Idea, Your Community, Your Action’ initiative that seeks to find people whose innovative ideas and inspirational work go beyond the ordinary to help unlock their community’s potential.

Jamaican attorney Joan Webley, founder of Nanook Enterprises Jamaica (see Gleaner story of Monday, October 20), will be among those who automatically qualify for entry, but so can any other Jamaican who believes he/she is a Maker of More. Projects must be entered by December 19.

Entrants for the Makers of More challenge must submit a written description of a project, invention, solution and/or initiative which, in the opinion of the judges, best meets all of the following criteria:

The project substantially differs from other initiatives in the field. Distinctiveness and innovation will be given a high ranking by the judges. This does not necessarily involve inventing something entirely new, but the project may comprise new products or processes as well as new applications or hybrid combinations of existing tools. In other words, innovation can be present in new approaches to an old idea or the application of an old idea to a different problem. Entrants should describe how their projects

are driven by original,

Importantly, entries should describe how the project builds stronger communities with more opportunities, reflects an understanding of the systemic barriers within the project’s specific context, describe how the project impacts these barriers and explain how it measures social impact through both quantitative and qualitative data. Entries that describe projects which are at an early stage may set out their anticipated social impact and how they plan on measuring it.

Entries should include a clear plan for reaching long-term goals and securing financial backing and describe not only how the project is currently funded, but also how it will be funded in the future. They should also include a realistic time frame for implementation, and the most successful entrants will demonstrate that they have strong partnerships and support networks to address ongoing needs and to aid in scalability and the maintenance of a clear financial strategy.

Projects must not promote Diageo or any of its associated or affiliated companies or products.

The Gleaner team travelled to London, courtesy of Guinness.