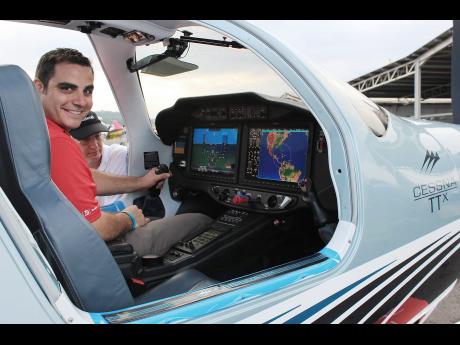 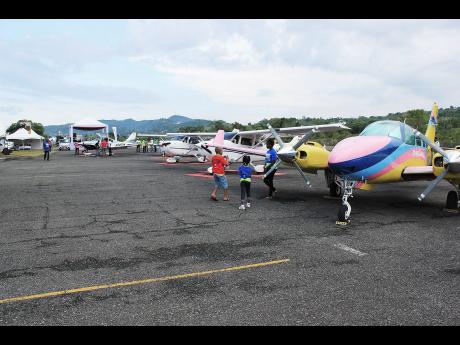 Some of the light aircraft on display at CATC's Aviation Open House. 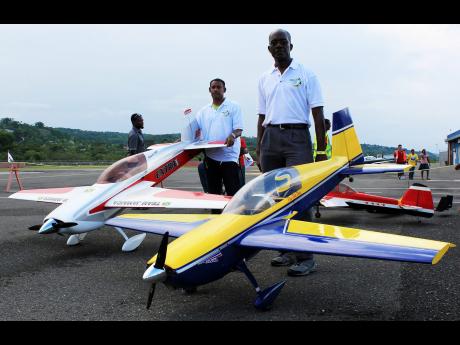 HUNDREDS OF aircraft enthusiasts from across the island gathered at Ian Fleming International Airport in Boscobel, St Mary, over Heroes' weekend for a two-day aviation open house and family fun fair.

The event, which was hosted by the Caribbean Aviation Training Centre (CATC), aimed to promote Jamaica's blossoming aviation industry and featured a wide range of aircraft, from radio-controlled models to some of the most advanced single-engine planes on the market.

Flying High Radio Control Club (FHRCC) member Donovan Osbourne has been collecting models since 1998 and praised the CATC for hosting the Open House and encouraging more young people and newcomers to take up the hobby.

Osbourne told Rural Xpress: "There is a wide variety of aircraft here today, and I think very few people in Jamaica are aware of our club, so this sort of activity is great.

"We were invited to come and show people here in Jamaica, that in addition to full-scale models, there is a smaller, radio-controlled element, which is also fun and quite exciting."

The FHRCC's youngest members, Daniel Hilton and David Shady, agree. Hilton, 11, said: "Today was great because I got to see all the planes land and take off, and lots of tricks."

Shady, 12, added: "I really enjoyed all the displays and doing my stunts. I'm definitely coming back next year."

Precision aerobatics expert, Deryck Taylor, is passionate about his hobby and suggests that anyone interested in radio-controlled aviation should come to the field at Kingston Polo Club, Caymanas, where FHRCC members meet most weekends to fly, compare notes, and socialise.

He said: "I've been doing radio-controlled aviation since 1973, but got my first model airplane back in 1966. I've always liked anything to do with aircraft and flying machines, and enjoy putting a model together and making sure all the components are integrated and working together to give you a properly controlled flying aircraft."

In terms of high-performance airplanes, the sleek Cessna TTX and the surprisingly spacious Beechcraft Bonanza G36 were the most impressive of all those on display.

While new models of either plane cost in excess of US$700,000, Beechcraft representative Rey Cabrera insists that for those who can afford to buy them, aircraft offer great value for money.

He explained: "Owning an airplane is an amazing experience that actually buys you time, which is something very few people realise.

"For example, it takes around two hours to drive from Boscobel to Kingston, but in the aeroplane, we do it in 12 minutes. If you're an executive making US$1 million a year, those two hours are worth approximately US$7,000 each, so you've just saved US$14,000.

"You cannot think of buying an airplane as spending money because you're actually saving money. It's more efficient and you can be in more places, more frequently, but in less time."

Cabrera added: "Events like this are very important because they help create awareness for the Beechcraft brand, and it's our duty to maintain a presence in the countries we consider to be our good friends."