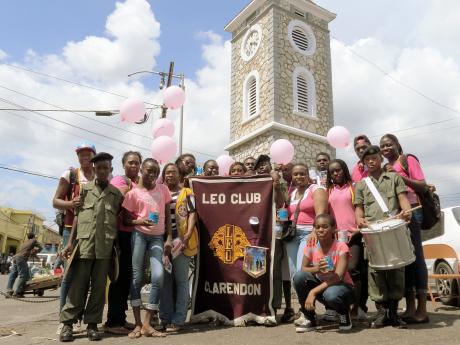 PHOTO BY SHANIQUE SAMUELS Members of the Clarendon Leo Club just before they released pink balloons to create awareness of breast cancer.

THE LEO Club of Clarendon has taken another step in its fight against breast cancer at its second annual Breast Cancer Awareness Fund-raising walk in May Pen last Saturday.

What began last year in an effort to help raise funds for the Jamaica Cancer Society's Education Outreach programme, developed into greater motivation to raise funds for a citizen of the parish who has been diagnosed with breast cancer. The club, in its effort to raise awareness about breast cancer, recently walked from the Leo Club bus stop in Denbigh to the clock tower in the town centre escorted by the Vere Technical Cadet Corps.

Along the way, they sold pink-ribbon pins on behalf of the Jamaica Cancer Society, issued flyers and collected a donation to assist in offsetting the medical costs of an individual with breast cancer.

Guided by this year's theme: 'Get it Right ... Join the Breast Cancer Fight!', Yanique Johnson, sight and health chairman said the Leos were "on a mission to inform and educate the May Pen population" while supporting a breast cancer fighter and honouring those who were taken by releasing pink balloons.

"It's devastating to lose a loved one to cancer, but even more distressing to watch them suffer in agony because of a lack of funds for medication," said Leo Yanique. "It is for this reason that we have decided to establish a cancer relief fund that will help to offset some of the victims' expenses," she further explained.

Prior to the walk in May Pen, Leos also made strides in Lionel Town and Chapelton in an effort to reach out and engage more citizens of the parish. A total of 380 breast cancer awareness flyers were distributed in all three towns and pink-ribbon pins were sold on behalf of the Jamaica Cancer Society. The major fundraising walk was supported by members of the Lions Club of Clarendon and both the Hayes and Race Track Police Youth Clubs.

"Our aim for this year's outreach is to encourage best health practices for early detection and to encourage both men and women to be aware of the risks and symptoms of breast cancer, while we raise funds and have fun," said Leo Yanique.

The Leo Club of Clarendon is a youth organisation of the Lions Clubs International, the world's largest service organisation that was founded in 1917 by Chicago businessman Melvin Jones. Lions clubs sponsor more than 6,400 Leo clubs worldwide in 142 countries and Leo clubs provide members with an opportunity to develop leadership and project management skills that can be applied to real-world experiences.