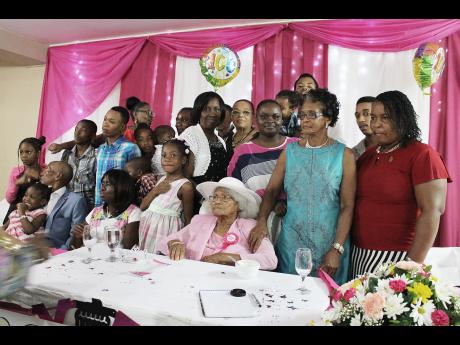 Tamara Bailey photo One hundred-year-old Nerissa Graham is flanked by a host of family and friends at her recently-held birthday celebration.

In a room filled with excitement, radiating much love and warmth, centenarian Nerissa Graham was the queen of the ball at her birthday celebration last Saturday, October 18. The celebrations were held at the Tropics View Hotel in the parish.

The ambiance, set with a decor of pink and white, complemented the sweet, calming personality of Graham, who was all smiles as her family and friends expressed words of sheer joy at her reaching such a milestone.

With a long life of service dedicated to several, Graham's sense of purpose and industrious nature started from as early as 1925 when she enrolled at the Zion Hill Primary School. As the years progressed and she blossomed, her ability to be undefeated by hard work saw her undertaking several endeavours: dressmaking, farming, higglering, and even butchering with her late husband, Reuben Graham.

"She did everything she could do for us and she made sure my brothers and I had everything we needed, and even after we were grown and had children of our own, she still took it upon herself to extend her hands to her grandchildren in any way she could," said her daughter, Deloris Graham, who has been her caregiver for years.

Described as a pearl of great price and one of God's ministering angels, Olga McDonald and Cecilia Grant-Francis from the Mandeville Baptist Church, said that Graham's blessing of long life is as a result of her efforts to uplift and inspire individuals in the Christian faith.

"Sis Nerissa loves her church family dearly and works hard in everything that she does. It was because of this that she was awarded a certificate of appreciation and faithful longstanding service twice from the church," stated Grant-Francis

A jocund Graham, when asked what was her secret for living so long stated: "You see how me little and how me big (small in body yet big in age) is because me honour me parents in everything, unuh nah live so long because unuh no honour unuh parents like me."

With sheer gratitude to God for continued blessing, Graham did not sing her favourite song, What A Friend We Have In Jesus, with her enviably melodious voice, instead she expressed, "Thank God I'm alive to see this day and age and me still have me five senses intact."

Rocking to the sounds of Taurus Riley's She's Royal, with an infectious laugh, Graham was crowned by her grandson, Devaughn Douglas, and lauded for the impact she had on his life.

"Grandma, none can compare to you: from our pear tree-climbing escapades, to you walking and hailing every mad man you see, to your generous personality - there is no one that can say a bad thing about you. I have always admired the fact that you have never been in contention with anyone. Once there is about to be a feud, you would say, 'shut up ... you gut side yah' then that is it ... you are a one in a million," he said.

Mayor Brenda Ramsay, who was present at the celebrations, stated that a life such as Graham's should be cherished and her influence placed on the young so they can appreciate good, sound moral values and the experiences of others.