Principal shares his secret to success 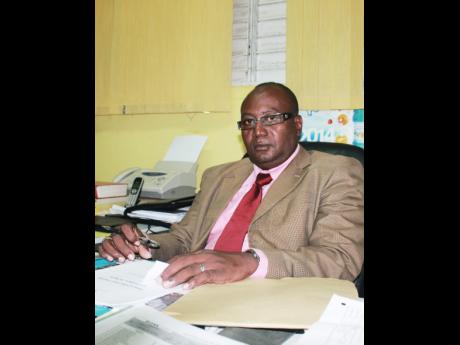 Over the past 12 months, Rural Xpress has published interviews with all but one of the 11 high school principals working in the parish of St Mary.

During that time, we discovered that although no two learning institutions are alike, senior members of staff from across the board generally shared the same concerns: a breakdown in parent-teacher relations; an increasing number of unruly students; and chronic overcrowding.

Similarly, the final headmaster to be featured, Michael Leigh of Annotto Bay High, acknowledges that he often agonises over such issues, but refuses to be distracted from his mission or allow minor setbacks to hamper his students' progress.

Leigh told Rural Xpress: "The average child comes here with an average of between 40 and 60 per cent and we are able to move these students up to a level where they attain eight, nine 10, 11, and 12 CSEC subjects, often at one sitting.

"Additionally, we have teachers who are willing to learn and build upon their own professionalism and the school is moving away from frequent physical conflicts to a more fluid and amicable facility, which is something we are very proud of."

According to Leigh, out of the 283 non-traditional schools in Jamaica, last year, Annotto Bay High ranked ninth and 15th, respectively, for its CSEC mathematics and English language results, and more than 30 of his current crop of students passed their maths exam before entering grade 11.

The statistics are impressive, but the principal, who was born a short drive east of Annotto Bay, insists the secret to his students' success is relatively simple: an appreciation for mathematics.

He explained: "When a new and challenging student comes into my office, the first thing I do is get them into a maths class. They don't have to pass, but once they start to appreciate that type of culture and environment, you'll notice they start doing better in other subjects, and invariably their behaviour improves."

Leigh's speciality is helping transform the lives of disadvantaged students, particularly young men. He says: "I tell my students: 'There is nothing wrong with being a tough cookie. The problem only arises when you channel that energy in the wrong direction'.

"One boy kept getting into trouble and was allegedly observed carrying two guns, but he turned himself around, and within two years, he left the school with about 10 CSEC passes.

"Now, he is studying criminology and forensic science and using that same energy, but in a positive way. He makes me proud because he understood what I was trying to teach him.

"I tell boys like him: 'You are the people Jamaica needs because you were born tough and you are tough in school. You are the tough policemen who are going to patrol the streets and get these bad guys.'"

He adds: "I just want them to use their energy in a positive way and to serve their country with the same resilience, willpower, and nerve they display at school every day. They are the people we are going to be able to rely on as our top soldiers, warders, and policemen."