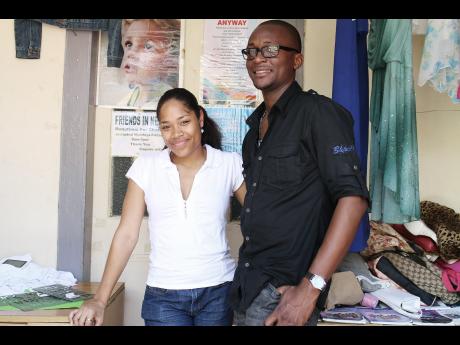 tamara bailey From left, volunteers Caren Fong and Sheldon Henry at the Friends in Need Organization and Thrift Shop in Mandeville.

While the country celebrated its national heroes as well as those who have done exceptionally well, locally, the charity organisation 'Friends In Need' did some awarding of their own to persons who they have watched over the years give selfless service to others.

The 21-year-old non-profit organisation began the awards internally then moved on out to the streets of Mandeville where these individuals could be located.

Eighteen-year-old volunteer, Caren Fong, the first to be highlighted, started volunteering with Friends in Need in August of this year out of a need to occupy her time, but little did she know that this experience would prove to be more than what she expected it to be.

Described as an individual with a work ethic second to none by founder Yvonne Townsend, Fong says because of this experience, she has been able to reach humanity in a different light.

"I started doing voluntary work at church. I taught at the Vacation Bible School, but that was only for a week and not enough for me, and so when I contacted Ms Townsend and she willingly took me on board, I was overwhelmed. Since being here, my interaction with the persons I see three times per week has really helped me as an individual - academically, socially and spiritually."

She added, "I even met a homeless man the other day who was fluent in Spanish. I couldn't believe it and it's a second language I really want to study further. Apart from the need for food and clothes of the persons we see, some of them just really want to talk and I enjoy being that listening ear," beamed Fong.

The sixth-form student, who hopes to complete studies in marine biology, had no idea that her services would result in an award, but wishes for the continued success of the organisation

"I want to see Friends in Need expanding not only nationally, but internationally ... Ms Townsend has a spirit that I just love: her passion for charity and her genuine love for people will help make the dreams a reality."

For the second outstanding volunteer, 33-year-old Sheldon Henry, the passion for philanthropy started after having to do a course while in college.

"While at UTech (University of Technology), I had to do a course that required me to do voluntary service. It wasn't something I loved: I did it to earn credits, but after leaving school, I just had this drive to get back into that field ... I searched around and I found Friends in Need."

The trained electrical engineer, who was received at Friends in Need with a bit of hesitation, proved himself to the organisation, offering aid to the remedial classes, street-people feeding, and even securing food and clothes for the organisation's clients.

"I have been here for a year and a half now, and the reward is better than money. It has taught me to be humble and to appreciate all things and all people no matter what."

"There are so many experiences I wouldn't trade for anything. I remember one Father's Day we went on the road to feed the street people and I met this mentally-ill man and I asked him jokingly if he was a father and he said yes. I told him to show me his child and the man took a wallet he had found and showed me a picture of a child that was in it and said 'see him here' ... I tell you that made my day," said a cheerful Henry

With several plans to further their lives and attain their goals, Henry and Fong say their lives would be void if they were unable to give back and impact others positively.

In Part 2 next week, we meet and honour an elderly man who single-handedly cares for his sick wife and a 90-year-old fruit vendor who is 'stationed' at the Mandeville Police station.