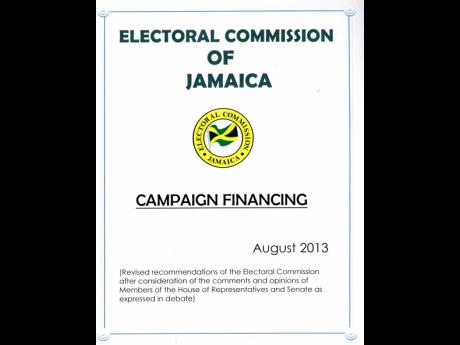 Proposed changes to the Representation of the Peoples Act (ROPA) have been tabled in Parliament and, as expected, are stimulating debate.

The proposed changes are primarily prompted by two reports coming out of the Electoral Commission of Jamaica (the ECJ) in 2010 and 2013. Civil-society groups have for years now been lobbying for changes to ROPA which they regard as crucial to treating with the scourge of political corruption in our society.

The amendments being proposed will pave the way for registration of political parties in Jamaica. This is novel as the Constitution of Jamaica speaks to the entitlement of individuals to offer themselves as political candidates but makes no reference to political parties.

Nevertheless, in Jamaica we have a rich tradition of candidates offering themselves under the banner of political parties. What the proposed amendments will do is to insist that political parties be registered. As such, with the passage of the amendments, no person will be able to be nominated as a candidate for a particular political party unless that party is ?registered?.

The amendments also set out the steps that a political party must take to be registered, for instance, it must submit to the ECJ a constitution setting out the objects of the party, the requirements for, and responsibilities of membership, among other matters, as well as provide the ECJ with other information, to include the name of the political party, its slogan, its colours, and a declaration signed by 500 electors stating their names and addresses.

Factors which may cause a political party?s application to be registered to be refused would include, but not be limited to, instances where the name of the party is such as would incite hatred or violence, or the name of the party is similar to an already registered party. Registered political parties will be required to keep accounting records and submit annual returns to the ECJ, both of which should inure to better corporate governance and transparency.

A major provision of the amendments to ROPA is that registered political parties which have submitted audited accounts for their last financial year will be entitled to no more than 40 per cent of their income for the previous year.

For instance, if the sum approved to be apportioned was $40 million to be split among four registered political parties equally, that would be $10 million per party. One could easily anticipate the $10 million being under 40 per cent of last year?s revenue of one of the major parties. It is also not clear what would obtain if the $10 million were to exceed 40 per cent of the income of a political party, for instance, where the party is very small. In this case, would the difference between the 40 per cent earned in revenue last year and the $10 million available be shared equally among the other bigger parties, or would the small party get in excess of its 40 per cent in breach of the section? This, it appears to me, is a lacuna in the law which should be addressed.

Even where parity of distribution does not result in a breach of any provision of the legislation, one questions whether parity in this instance may not itself result in inequity. It is equitable for a large political party to receive an equal amount of state funding as a small party with fewer candidates and smaller overheads? Methinks not. Sometimes in striving to achieve parity among contenders, inequality must be the path taken.

The view, of course, of going along this path of state funding is that political corruption will be lessened. We would not be naive enough to think removed altogether. While I am not happy about a dime of my hard-earned taxes being used to fund political parties, I am equally not surprised that at least one political party would refuse the offer, albeit in the most chivalrous and magnanimous of language. Accepting state funding, as proposed, will come with strings attached. A party accepting state funding must declare sensitive information to the ECJ, such as affiliates of the party who receive funding from the party, details of the officers of those affiliates, among many others.

Parties receiving state funding will also be required to provide books and records ?as prescribed? (a very vague term) which may then be reviewed by the ECJ through the filing of annual reports. While I accept that the motivating factors in the refusals we have heard so far may well have been totally altruistic, given the lack of transparency that has shrouded campaign financing over the years, I am not surprised that there will come others that may not be so altruistic at heart.

n Shena Stubbs-Gibson is an attorney-at-law and legal