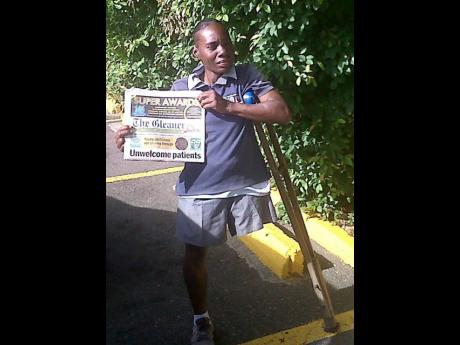 balance, Maureen Saunders held a stack of daily Gleaners tightly in her arm as she tried her best to sell them to passing motorists, a job which she

It is taking a toll on her,

however, as she states that she is in dire need of a wheelchair.

Saunders, who is 33 years old, was born with one leg.

"After that, I grew up in a children's home. Unfortunately, the lady who owned it died so we had to find somewhere else to go. At that point, I was about 15 years old. I then moved to Elletson Flats, after which I had several difficulties in getting a job due to my disability," she told The Gleaner.

"I did days work with a family. However, they killed both the husband and the wife, after which I tried and tried but couldn't get any other jobs," Saunders added.

It wasn't until three years ago that she decided to enquire about becoming a Gleaner vendor.

"I went to the Gleaner immediately and they were so helpful. I then started to work on South Camp Road before eventually moving to South Avenue in St Andrew where I have worked ever since," Saunders said.

"It is a hassle to perform this job, but I need the money to take care of my expenses. I have to wait on a bus, take public transportation and then stand in the sun for long hours on one foot trying to sell the paper. If I don't stand then I will miss a sale, and that is less money for me," Saunders said.

"It is also getting more painful to stand the older I get as I am here selling the paper from Monday to Sunday. That is why I really need a wheelchair. I would love a motorised one to get around in the days," she added.