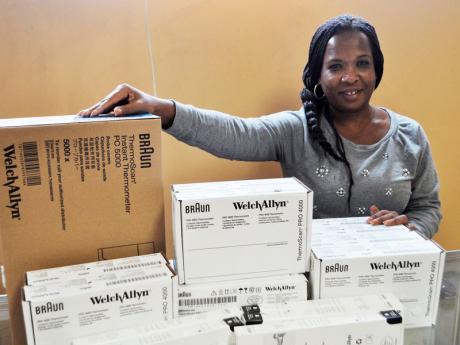 The donation of laser thermometers and accessories from Tower Isle Frozen Foods are being prepared for shipment to Jamaica by Lezlie Rutty from Trans Caribe Express Shippers, who volunteered to transport the supplies to Jamaica at no cost. 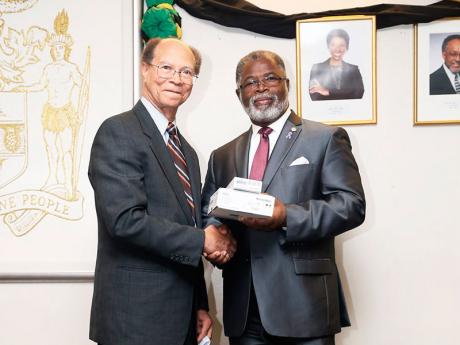 CEO of Tower Isle Frozen Foods, Patrick Jolly (left), makes a presentation of a sample of Welch Allyn laser thermometer to Jamaica's consul general in New York, Herman Lamont. The presentation forms part of a larger contribution that Tower Isle made to Jamaica to boost the island's preparedness for the deadly Ebola disease. Contributed Photos
1
2

Patrick Jolly, chief executive officer, of Tower Isle Frozen Foods (United States), announced last Tuesday at the Jamaican Consulate General in New York that his company has just purchased 10 Welch Allyn ThermoScan thermometers for use at Jamaican airports, seaports and hospitals, to help boost the island's preparedness for Ebola in the event that Jamaica has to deal with the crisis.

Tower Isle has also donated 30 boxes of probe covers to accompany the thermometers which will provide a capacity for 6,000 temperature checks that can be used at any arrival point on the island - airports, seaports and hospitals. The supplies were shipped to Jamaica last week.

The announcement was made at the consul general's second annual Heritage Awards ceremony where 12 Jamaican community activists from across the northeastern United States (US) were honoured for outstanding community service to the diaspora.

Jolly, who runs one of the largest patty manufacturing companies in the world, was the recipient of the Corporate Citizenship Award for the company's involvement with The Gift of Life, Inc, an organisation that brings children to the US to do corrective open heart surgeries when the procedure is not available in their home countries.

"Given the potential threat of Ebola to the island, Tower Isle Frozen Foods wanted to make a contribution to further strengthen the readiness of Jamaica", Jolly said. "We learned that this was one area of need, so we responded immediately with the donation," he continued.

The donation for Jamaica is being shipped to the island by Trans Caribe Express Shippers in East Orange, New Jersey. Roydell Rutty, chief executive officer of Trans Caribe was one of the award recipients who, when the Ebola support for Jamaica was announced,immediately volunteered to ship the products at no cost.