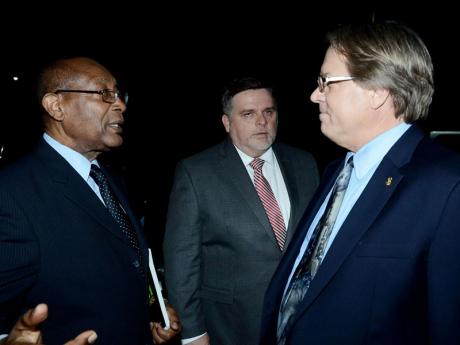 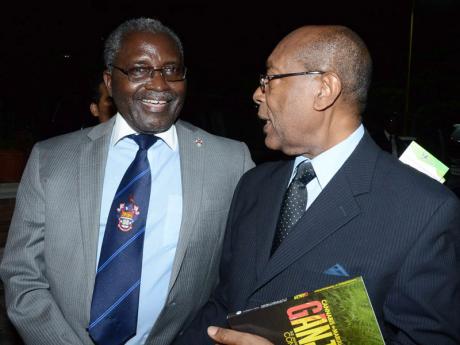 Professor Ishenkumba Kahwa (left), of the University of the West Indies, congratulates Dr Henry Lowe on the launch of the first set of products under the Medicanja brand. 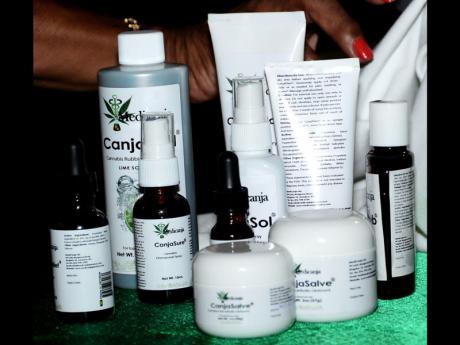 Amid much fanfare at Eden Gardens on Wednesday, the Medicanja team unveiled the products, dubbed 'the magnificent seven'. Created by the Dr Lowe-founded Bo-Etch Research and Development Institute but marketed and retailed under the Medicanja brand, all the products are geared towards some form of pain relief. CanjaCol - Medicanja's cannabis rubbing alcohol; CanjaRub - the company's anti-arthritic healing oil; CanjaFlam - an anti-inflammatory cream; CanjaSol - pain relief spray; CanjaRelief - a sublingual (under the tongue) drop to ease nausea; CanjaSure - an oral mucosal spray to ease the nausea caused by chemotherapy; and CanjaSalve - an anti-inflammatory ointment that relieves various pains.

But Dr Lowe said the products weren't on the shelves yet and wouldn't be until the regulatory and legislative framework is established and approved by the Government of Jamaica and the Ministry of Health for the local and international markets and in the health-tourism business. He decried the many barriers to developing the products locally, noting he had to go overseas and, in three months, had come up with seven products. He pleaded for Government support.

"We have too much bureaucracy and too many naysayers," he said. "It has to change or it's going to discourage too many persons." But these products, are just the beginning. Plans are already well under way to introduce other products including CanjaBis - eye drops to treat glaucoma; CanjaDerm - a sub-dermal patch to ease deep, tissue pain; and CanjaTea - which as the name suggests is basically good old ganja tea. The company also officially launched its website www.medicanjajamaica.com. Dr Lowe noted future products would address other serious illnesses, including Type 2 diabetes, multiple sclerosis, and even AIDS.

Medicanja is looking to make serious inroads into what is currently estimated as a US$7 billion export market for marijuana products. Dr Lowe also said that, by the first quarter of 2015, Medicanja would be floating an initial public offering, giving Jamaicans both locally and in the diaspora, a chance to invest in the company. Dr Lowe said he was looking to file 10 patents by year end, including Medicanja products. The company has also registered one company each in the US and Canada to support research and development.