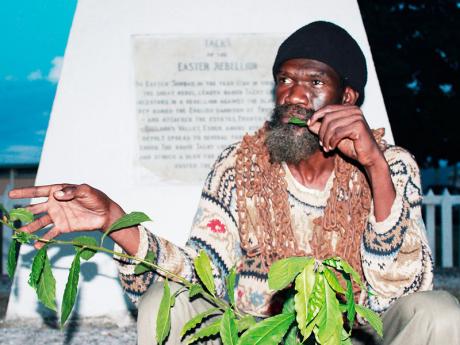 Derrick 'Black X' Robinson with guinea hen weed at the Tacky Monument in Port Maria, St Mary, minutes before setting out on his annual 100-mile pilgrimage to Kingston and back.-CONTRIBUTED

PORT MARIA, St Mary:EVERY AUTUMN for the last seven years, Derrick 'Black X' Robinson, makes a pilgrimage from Port Maria, St Mary, to the capital city and back, as a tribute to the leader of the Caribbean's first civil uprising.

X believes Tacky, who led the infamous 1760 Easter Rebellion in Port Maria, should be recognised as a national hero and marches annually to raise awareness for the issue and the organisation he chairs, the Tacky Heritage Group (THG).

However, his most recent pilgrimage, which took place over Heroes weekend, had a slightly different focus: Marcus Garvey, Peter Tosh, and a meeting with controversial Nation of Islam (NoI) leader, Louis Farrakhan.

X explained: "Tacky, Marcus and Peter: it's one line and it doesn't get much straighter. They were all revolutionaries with militant minds; formidable people dealing with formidable issues for a formidable time.

"Sunday 19 October was Peter Tosh's birthday. Let's look at the issues he stood up for. Ganja and injustice are world news now. He has been controversial and outspoken about a lot of topics, but history is proving him to be on the ball, and we need to recognise that.

"This year, he has been bestowed the honour of Order of Merit, posthumously. We appreciate that, but we appreciate his music and message more.

"This young man from St Ann, Jamaica, had the vision, drive, persuasion and motivation to enter the unknown, and it took him far and wide. I don't think we, as a country or government, have come to grips with that achievement."

This year, X's annual trip coincided with Farrakhan's public conference at the National Arena in Kingston, and according to the THG's project coordinator, Jacqueline Samuels, the NoI leader and his delegation were very responsive to her colleague's mission.

She told Rural Xpress: "X did not meet with Farrakhan, but was invited to shake his hand, so he used the opportunity to ask Farrakhan to lay a tribute at the Tacky monument downtown.

"He also did interviews with Farrakhan's newspaper and a major radio broadcaster where he highlighted what the walk and the THG are about.

"In terms of the support, the grassroots people are there. On this walk, X had more supporters than in previous years because people are starting to look at him as a luminary in his field. He is achieving something original and unique," Samuels added.

The pilgrimage, which is around 100 miles in total, is physically draining and X confessed that 2014 was by far the loneliest journey as most of his colleagues had contracted chikungunya, forcing him to walk alone and chew leaves from the guinea hen plant to immunise himself against the virus.

He explained: "I walked alone this time because of the chikungunya. I didn't want to expose anyone to sickness on the way.

"It is a very difficult journey, but after a while, your body knows what to expect and how to prevent injuries. Once you get past five miles, your body starts to prepare and adjust itself for the long journey ahead. It's called muscle memory."