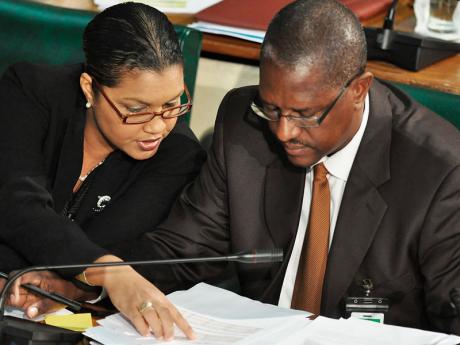 Onika Miller, permanent secretary in the Office of the Prime Minister, points out some reporting facts to Martin Miller, acting managing director of the National Housing Trust, during yesterday's sitting, to Parliament''s Public Accounts and Appropriations Committee. - Jermaine Barnaby/Photographer

ONIKA MILLER, permanent secretary in the Office of the Prime Minister (OPM), has joined her portfolio minister in claiming ignorance about the decision of the National Housing Trust (NHT) to purchase property at Orange Grove, Trelawny, before it was published in the media.

At the same time, Miller said that while the OPM gets quarterly reports from the NHT on its operations, much attention is not placed on the investment portfolio.

"I was not made aware of the purchase of Outameni or any other element related to Outameni prior to very recently. I was not formally advised by the National Housing Trust," Miller told Parliament's Public Administration and Appropriations Committee yesterday.

The permanent secretary, asked by committee member Audley Shaw whether the OPM's representative on the board of the NHT advised her, as chief accounting officer, about the issue, further said: "I was not advised by the National Housing Trust nor any member of its board of directors about the acquisition of lands on which Outameni operates prior to my seeking some information on the reported purchase which was reported in the public media."

Prime Minister Portia Simpson Miller, responding to similar questions in the House of Representatives two weeks ago, said the first time she heard of the purchase was when it was reported in the media.

The Gleaner broke the story on October 29 that the NHT had spent $180 million to acquire the failed attraction and had contemplated a spend of $111 million over three years, to carry out upgrades on the facilities.

In addition, the NHT would have to spend $20 million to acquire the intellectual property rights, chattels and scripts associated with the Outameni Experience.

Sonia Hyman, the director of planning and development in the OPM, is that entity's representative on the NHT's board. She has worked in the public sector since 1982. She also served the NHT board from 2005 to 2007, and was again appointed in April 2012.

Shaw questioned the reporting procedure by which the OPM's representative on the board takes matters back to the ministry.

"I want to know how the responsible minister is kept informed. That is the reason why the person is on the board," Shaw stressed.

Miller was guarded in her response, but said the board member usually reports to her either orally or in writing.

"[For] The representative of OPM on the NHT board, the expectation from me as accounting officer, is that the representative would bring to my attention, and or to the portfolio minister, matters of significance or variance, matters that would raise concerns or those matters for which I would have an expectation would be brought to my attention. The NHT, in particular, provides quarterly reports and, those quarterly reports, we have meetings to discuss," Miller said.

She added: "Those reports do not drill down to details in relation to investment projects. The focus is placed on housing projects so, even in our reviews, we would look at the progress at Longville, the progress at Jacaranda, given the nature of the National Housing Trust."

Committee member Raymond Pryce sought to find out from Miller what triggers the accounting officer to advise either him or herself or the portfolio minister when a project is proceeding well or otherwise. He also asked Miller to explain what she meant when she told Shaw the significance of an activity might draw the curiosity of the accounting officer.

Responding, Miller said significance speaks to both size and scale of projects, in relation to a monetary threshold, as well as "outside of the norm of what an entity would be engaged in".

He said the matter speaks fundamentally to "the role and purpose of the accounting officer in the wider scheme of this concept called governance."