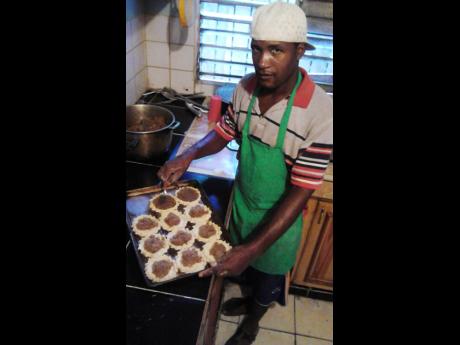 THIRTY-SEVEN-YEAR-OLD STANLEY Harrison is anxious to expand his business to the point where he can join other bakeries in supplying pastry products to Jamaicans.

Born in the parish of St Catherine, Harrison decided to become a baker because of his love for that culinary art. He currently operates his own pastry business out of his home kitchen.

"I watched my mother bake pudding, coconut drops, totos and gizzardas while I was growing up and, right away, I developed a love for baking," Harrison told Rural Xpress.

According to Harrison, after leaving school, he started a job as an assistant baker at Cake World in Spanish Town.

"While working there, I learnt the art of baking and had this urge to do something for myself, but was severely restricted by not having the funds to start my own business," Harrison declared.

He added that he finally mustered the courage to leave Cake World and started out baking gizzardas, which he sells to the residents in his community.

Harrison said he had difficulty distinguishing himself, so in an effort to earn enough capital to sustain his business, he went back into the world of work, this time at Juici Patties.

"It wasn't long before I left Juici Patties and started my own thing once again, I even went on a do a certificate course in culinary arts at the University of Technology," he said.

Harrison, who is married with two daughters, told Rural Xpress that it has been 10 years since he started out as a small independent businessman baking mainly gizzardas and totos and riding his pedal cycle to sell to householders in different communities close to his John's Road residence.

The self-employed man said he is exercising patience as he seeks to achieve his long-term goal of buying a house.

He said he also receives orders to supply coconut drops and gizzardas from Jamaicans living abroad.

"He is a dedicated person who I know will excel to greater heights," Watson said.