Flooding no more a concern for residents of Buddho 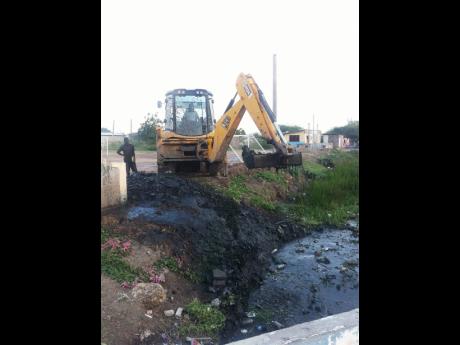 Ruddy Mathison Operator of heavy equipment assisting in the cleaning of a major drain in BUDDHO Old Harbour Bay.

The idea that some communities are driven by a mindset that epitomises handouts from politicians as the main focus, does not reflect a true picture of one community in Old Harbour Bay, St Catherine.

Residents in the small community of Buddho, Old Harbour Bay, are expressing pleasure over the extensive cleaning of more than 500 metres of drain in the area.

The residents' joy is even more profound by them not having to worry about their homes being flooded out when it rains because of the failure of the relevant authorities to clean the drain for over four years.

Community leader Daniel Martin told Rural Xpress that he has been living in the area all his life and, whenever it rains, the entire area is flooded causing some anxious moments for the more than 1,000 householders who live adjacent to the drain.

"Cleaning this drain is very important for the community because the many years it was not done, we suffered badly," Martin stated, adding that residents experience severe flooding whenever it rains to the point where they are unable to get out of their houses until the flood waters subside.

He said the cleaning of the drain has contributed to a decline in mosquito infestation - a problem that plagued the community for a long time.

According to Martin, important amenities of this nature were neglected for many years until councillor for the area, Peter Davis, intervened and made representation for the drain to be cleaned.

"We are not asking for handouts. All we want are things like these that can benefit the entire community being done in our interest ," the community leader asserted.

Meanwhile, Davis said cleaning the drain was a priority issue for him.

"I have seen how the people suffer whenever there is heavy rain, and I made cleaning this drain a priority for me," he declared.

He said part of his vision is to see the reduction of youth unemployment in Old Harbour Bay, hence he is proposing the transformation of a community centre in the area into a HEART training facility to equip the youths with various skills.

Councillor Davis said the community has been neglected for some time and he vowed to change this situation when he decided to represent the people in the area in 2012.