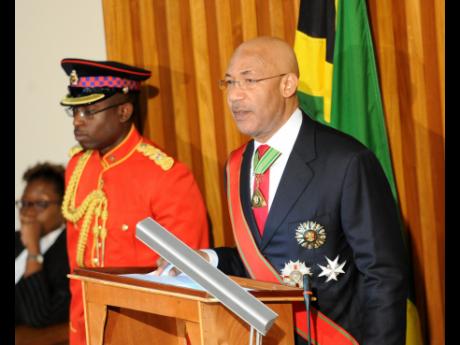 Several key pieces of legislation, aimed at enhancing and improving Jamaica's national security and justice systems, are included on the legislative agenda for the new 2015-16 parliamentary year.

This was outlined in the Throne Speech delivered last Thursday, at Gordon House, by Governor General Sir Patrick Allen.

Passage of these is expected to result in the Caribbean Court of Justice replacing the colonial Judicial Committee of the United Kingdom Privy Council, located in London.

Delivering his address under the theme: 'Partnership for Development: Inclusive Growth ... Expanding Opportunities', the governor general pointed out that the 2015-16 parliamentary year is expected to be equally active as the previous one, as the Government seeks to improve the justice system, "and protect all Jamaicans".

Another legislation outlined by the governor general is the Criminal Justice Administration (Amendment) Act, which makes provision for sentence reduction on guilty pleas.

This, he explained, would "remove the existing disincentive to pleading guilty to offences which carry mandatory minimum sentences".

Also scheduled, he informed, is the Jury (Amendment) Bill, which will bring "important reforms" to the jury system, which is currently "beset with challenges" that cause "significant" delays in the trials of serious criminal cases.

There is also the Sexual Harassment Act which, the governor general explained, would provide legal protection for persons at the workplace and in other institutions.

"It will give recourse, both to the courts and to the Industrial Disputes Tribunal, whose mandate and capacity will be expanded to deal with these claims, thereby providing effective redress for victims," he noted.

Also shortlisted is the Cybercrimes (Amendment) Act, which the governor general explained, will provide more "robust" tools to facilitate the investigation and prosecution of cybercrimes, "and to bring the Act in line with international best practice".

The governor general also advised that the long-awaited amendment to the Road Traffic Act would significantly modernise the current legislation, and "give support (for) higher levels of discipline and orderly behaviour on the nation's roads".