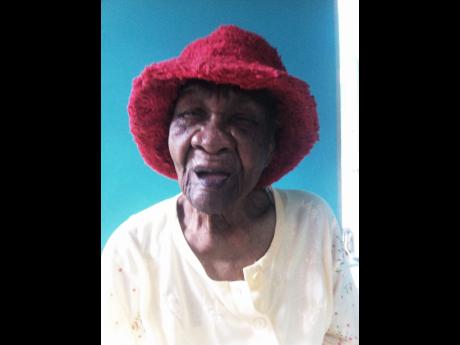 Claris Bennett, at age 101, is reputed to be the oldest woman in the community of Savannah in St Catherine.

Born in the district of Savannah on July 9, 1913, Bennett, the only one of two children alive at present, was the second child for her mother and only child for her father.

She attended school in Linstead. After leaving school her father died. Her mother remained unmarried.

Slowly recalling events of the past, with the aid of her youngest of eight sons, the centenarian recounted for Rural Xpress the things she remembered while growing up.

"Me do higglering at Coronation Market; me buy and sell orange and banana," she said with a stuttering voice, disclosing that a dozen bananas were then sold for six pence.

She paused for a while and gave a brief history of Rollington Town, stating that it was known as Rollington Penn back then before it was divided into lots and sold for seven pounds a lot.

There was another pause and then she declared, "Me have the money to buy it but me think to me self, wha me a do wid it when God soon come."

Bennett recalled the 1951 storm, revealing that her father had died before the storm and her mother, who was ill at the time, was at home with her and seven boys when the winds started to blow .

According to her, the wooden house they were living in was torn apart by the strong winds and they had to seek refuge in the neighbouring district of Bambury. Her mother, she said, died in Bambury just after the storm.

The senior citizen said she went back to Savannah to rebuild the house using wet clay to do the walls. After that, she had her last son. She left Savannah and went to live with the father of her son in Silent Hill, Manchester for a while but soon became homesick and returned to Savannah with her boys.

Presently, the golden-age woman, who lost her sight in 1995, moves around her house in a wheelchair, aided by her caregiver Sheron Butler.

Butler told Rural Xpress that Bennett is a lively woman who keeps her amused. The caregiver said she takes Bennett to the doctor every month and, apart from poor circulation in her legs, the old lady does not have any other complaints.