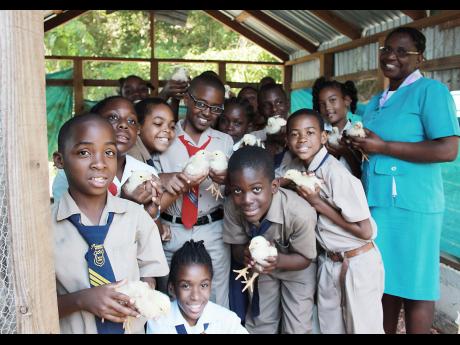 An innovative project that helps provide cooked breakfast and lunch meals for over 200 primary school children in Labyrinth, St Mary, has reaped huge rewards and benefits, according to the principal who launched the initiative six years ago.

When Audrey Fisher arrived at Labyrinth Primary School as the new principal in 2009, she found an ailing institution where students and teachers struggled to perform their duties because of the dilapidated infrastructure.

However, thanks to the principal's persistence and ingenuity, she was able to secure support from the Jamaica Social Investment Fund (JSIF), who spent around $25 million renovating the school and constructing a poultry house, where chickens raised are used to supply the school's canteen with nutritious, daily meals.

Fisher told Rural Xpress: "You wouldn't want to see this place when I came here (laughs). The road was terrible and everything was in really bad condition. The outside looked good, but it was raining and water was coming through the roof, leaving pond-sized puddles on the floor.

"Bats had made a haven in the library; there were no windows, and when teachers came in the mornings, they would have to spend time cleaning up the mess left by stray cats.

"That was my first day's experience. I literally sat around the desk and cried. But I'm not a person who throws their hands up in despair. I don't worry about things, I find solutions."

Fisher's prayers were answered during a trip to the Ministry of Education region office. Someone overheard her canvassing for resources and recommended that she contact JSIF.

She explained: "I didn't hesitate to write a letter telling JSIF the situation and explaining that the school was no longer able to operate as a local emergency shelter because the building had no roof."

In addition to replacing the roof, constructing a poultry house and renovating the school's main building, JSIF also refitted the kitchen, provided a resource centre with six computers, and built a multipurpose sports court.

Project manager for JSIF's Emergency Recovery Programme, Rudyard Williams, described the school's refurbishment, which was completed in 2012, as an entirely 'unique' project.

He said: "While we were doing development work after Hurricane Gustav, we received a list from the Ministry of Education of several schools that needed help, and Labyrinth was on the list.

"We visited and saw the condition of the school, spoke with members of the Parent-Teacher Association, who were very much involved, and interviewed the teachers.

and build a poultry house. It was pretty unusual, but a great project to work on. The school is still benefiting from those things now."

Fisher believes the chicken farming has made the school more sustainable and self-sufficient and that JSIF's intervention is largely responsible for her students' improved grade-four literacy and numeracy test results.

However, the principal refuses to rest on her laurels, and insists there is still much work to be done. She said: "I'd like to move the chicks into the larger coup so we can start doing egg-laying, which would be really good for the breakfast programme.