Schools to get more rooms 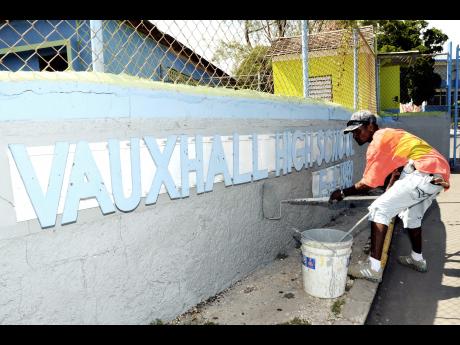 File
Bruce Campbell, puts a fresh coat of paint at the entrance at Vauxhall High School in East Kingston in 2009. The institution is one of nine schools to be expanded to ease overcrowding.

Thirteen high schools are to benefit from a combined $290 million allocation in the Ministry of Education's Budget which is aimed at reducing overcrowding in secondary schools.

The project, to be implemented by the National Education Trust (NET), will involve the construction of additional classrooms at Old Harbour and Maggotty High schools.

"The number of classrooms for each school varies on what was seen to be the demand. It is not a matter that each school is going to get eight or five classrooms," Yvonne Clark, CEO of the NET said.

Clark said her organisation is currently planning the new projects and that work will not commence on all at the same time.

"They are to be staggered throughout the fiscal year as the resources allow," Clark said, while adding that the intention is to complete all schools this year.

Completion of projects that are required based on a memorandum of understanding between the Ministry of Education and Mount St Joseph Catholic High School and Belair School are also set to be done this year.

Clark said pre-contract activities has taken place with regard to Old Harbour and Maggotty High schools.

In the case of Mount St Joseph Catholic High School, Clark said design works have been completed and most of the pre-contract work is in place for work to be done at Belair School.

Meanwhile, some $78.3 million is to be spent under the Inter-American Development Bank-funded Primary Education Support Project. The new fiscal year will see the construction of additional classrooms at McIntosh Primary and Barracks Road Primary and Junior High schools being completed.

At the tertiary level, the University of Technology (UTech) is projected to get $380 million for its enhancement project.

The project is aimed at enhancing UTech's capacity to provide quality level education in Jamaica, through the expansion and upgrading of its facilities, further development of its staff and improve its financial sustainability. The university got $167.5 million in the current budget to undertake the project, which to date has received $608.3 million.