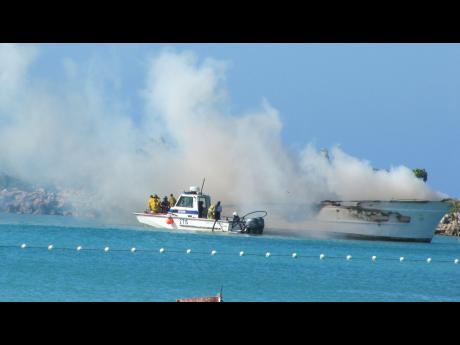 A boat burns in Ocho Rios Bay on Thursday.

Fire destroyed a boat in the Ocho Rios Bay on Thursday afternoon while the nearby state-owned fire boat remained in a state of disrepair.

The Marine Police, using their boat, which was not equipped to fight fire, responded and fought the blaze using a pillage pump; however, the vessel was destroyed.

Unconfirmed reports indicate that one man was injured in the incident and taken to hospital. His condition could not be determined.

Member of Parliament for North East St Ann Shahine Robinson, who later arrived at the bay, slammed Local Government Minister Noel Arscott for the Government's tardiness in getting the vessel repaired.

"We've had this promise, which has been outstanding two years now since the boat has been inoperable," Robinson told The Gleaner.

Robinson said it was just Wednesday night that the matter of the fire boat was raised during the Standing Finance Committee meeting in Parliament.

"Mr Desmond McKenzie, the opposition spokesperson on local government, raised it with the minister of local government, who answered, maybe in a very cavalier way, that the parts had been ordered and that it would be fixed," said Robinson.

She added: "We say that the minister needs to be proactive, he needs to act now, and we hope that this incident, unfortunate as it is, will serve as a wake-up call for Minister Arscott to act."

It is unclear who owns the boat.

The Marine Police, who are investigating, were not immediately able to give any information on the incident.