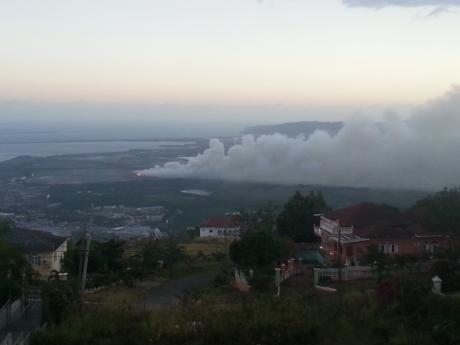 Smoke billows across the plains of St Catherine and even up to the hillside community of Plantation Heights Wednesday evening as a fire raged at the Riverton City dump. Massive fires have ravaged the dump in the past, the last one in 2014 affecting 15 acres of land. 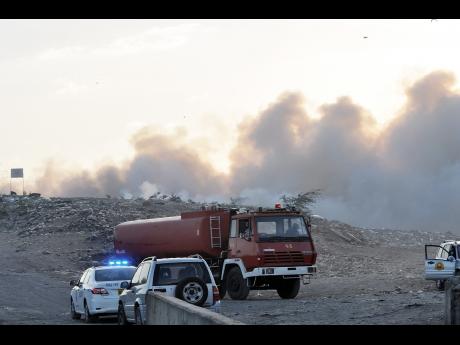 Jermaine Barnaby Photo
Police vehicles head towards a fire on the Riverton disposal site in Kingston, while a water truck heads out for a refill.
1
2

Residents of the Corporate Area and St Catherine may continue to be affected by the smoke nuisance coming from the fire at the Riverton City Dump.

Up to late last night personnel from the fire department and the National Solid Waste Management Authority (NSWMA) were working to put out the blaze.

Director of Operations at the NSWMA, Percival Stewart, says steps have been taken to ensure that the fire does not spread to other areas.

Stewart says the fire started about 3:15 yesterday afternoon at the rear of the dump.

According to him, the fire started out small put subsequently ballooned as a result of strong winds and the tardiness of fire personnel, among other factors.

He says the blaze was eventually cauterised to a defined location.

Stewart says there is no threat to life or property.

He says all hands are on deck to extinguish the fire.

Meanwhile, the Office of Disaster Preparedness and Emergency Management (ODPEM) says it is monitoring the situation and its National and Parish response mechanisms remain on standby.