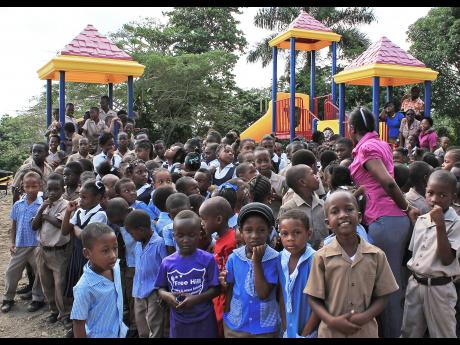 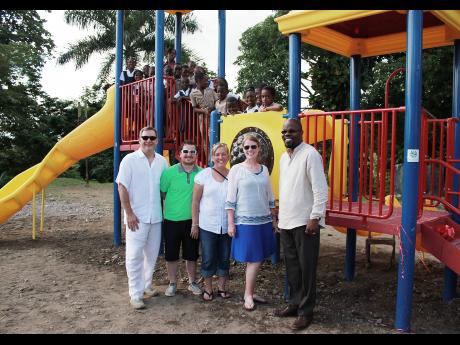 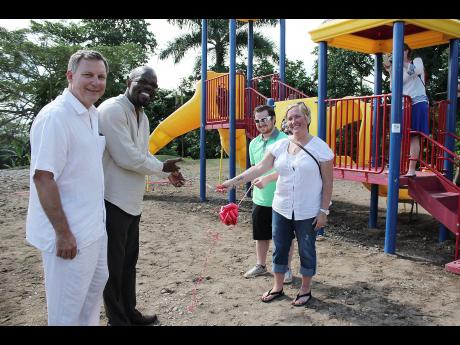 ORANTES MOORE photos Gene Krcelic, Jordan and Valerie Bighle, and Rebekah Gregory of the Premier Foundation, alongside principal Martin Murphy at the opening of a US$70,000 childrens play area at Free Hill Primary and Infant School in St Mary.
1
2
3

Students at Free Hill Primary and Infant school in St Mary were overjoyed to receive a new state-of-the-art climbing frame for their play area last week, thanks to a donation worth J$8 million made by US-based, Christian charity the Premier Foundation.

Over the past 18 months, the school has received several donations from the Issa Trust Foundation (ITF), which was established in 2005 by Couples Resorts to support education and health-care services in rural areas.

These endowments include a computer-resource room worth more than J$1.7 million, more than 1,000 library books and, according to Premier Foundation's president Gene Krcelic, the Jamaican charity played a major role in the development of Free Hill Primary's playground project.

Krcelic told Rural Xpress: "This all came about from a cruise we were on. We developed a relationship with the Issa family, who told us about this school, and then we brought around 25 people here about a year ago.

"[The school's principal] Martin Murphy told us the children needed a playground and a year later, they have one. Back home, something like this would cost around US$70,000 (J$8 million), but we worked with different organisation and donors, put the funds together, found the playground and got it shipped over."

Krcelic noted that his organisation's energies were geared towards child-focused institutions, which are oftentimes unfairly ignored, simply because they are located in rural areas.

The charity worker said: "We work all around the world from slums in Africa to orphanages in Mexico and other Caribbean countries. These places tend to be forgotten because they are so far off the beaten path. They are not close to the main road or where the resorts are.

"But it's like the old African proverb: 'It takes a village to raise a child'. These children can't be forgotten just because they live a few miles off the main road.

"Then, of course, you have the heart and discipline of someone like Mr Murphy and everything he offers to the school. It's very important to us to partner with people we know will continue the strong legacy of love and learning."

Murphy acknowledges that his students have been fortunate to receive such generous support from international well-wishers. "I think it's just the blessing of the Lord," he said.

"At Free Hill, we believe in taking a holistic approach to the children's development. The mind, body, and intellect should all be developed and since I arrived here in 2006, it has always been part of my vision to have a proper play area for the children.

"I got connected with the Premier Foundation through the ITF, who approached them to assist us and today, after a year of planning and negotiations, it has finally come through. Everyone is very excited and there are many more things in the pipeline, so we're really on a roll."

Premier Foundation member Jordan Bighle, whose father visited Free Hill last year, but passed away before the playground project was completed, added: "I think he would be pleased at what's happening here today.

"For him, it wasn't just about giving, it was about doing, and so for the entire week, we've been the hands and feet that helped put this project together. To see these kids here today, I think would make him very proud and happy."