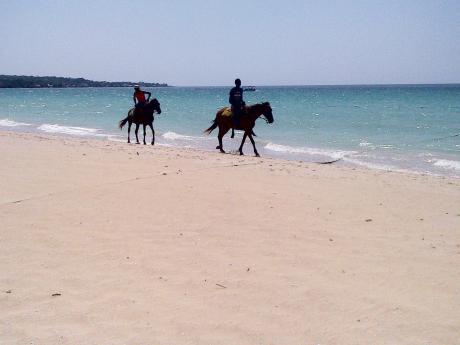 Paul Williams
Horseback riders along the Negril shoreline. Tourism interests and government stakeholders remain deadlocked over the installation of breakwaters to arrest coastal erosion in Negril.

AFTER MORE than a year of at-times heated debate, tourism interests and government stakeholders remain deadlocked over the installation of breakwaters to arrest coastal erosion in Negril.

"We are going to continue to question the methodology; we don't believe it is the correct solution for Negril," said Sophie Grizzle Roumel of Charela Inn.

She is one of several hoteliers who have been vocal in their opposition to the breakwaters, which were given the green light by the National Environment and Planning Agency (NEPA) last December.

"After carefully considering all comments from stakeholders in Negril and the wider Jamaica, the Natural Resources Conservation Authority [serving as the board of NEPA] has granted the National Works Agency beach licences for the construction and maintenance of two breakwater structures offshore the Long Bay area in Negril; dredging of the sea (capital dredging), and coastal reclamation," NEPA said in a December 16 press release.

"Given the public's interest and the active involvement of the Negril citizens, the terms and conditions of the beach licences will be made available to the interested parties to allow stakeholders the opportunity to hold the developers accountable for the works planned. A monitoring partnership will be established through the formation of a local monitoring committee that will include public and private sector interests," the agency added.

Hoteliers are unmoved by the decision and contingencies.

"We will not embrace it. We will do everything within our power to stop it," said Roumel, who is also a director of the Negril Chamber of Commerce.

Mary Veira, who has served as a convener for the hoteliers on the matter, echoed her sentiments.

"If you want to experiment and build breakwaters ... don't come to a tourism resort and do it," she told The Gleaner in January, adding that the loss of the US$5.4-million breakwaters would not be a sacrifice.

Despite the prevailing sentiment among the hoteliers, the Planning Institute of Jamaica (PIOJ), serving as the national implementing entity for the island's Adaptation Fund project under which the work is to be done, is set on resolving the impasse.

Acting Director General Claire Bernard said last Tuesday that they are even now trying to organise a meeting of local actors and PIOJ head honcho, Colin Bullock, to discuss the matter. It is to be the latest in a series of meetings held in the last year to arrive at a solution.

"It is our expectation that both sides can discuss the matter dispassionately so that we explain again to them the reasons why the US$10-million project was developed, and share with them what we understand to be the science behind the project," Bernard said.

"We want to take the opportunity to show them how the concerns that they have raised have been dealt with and, if not yet dealt with, then how, under the licensing process, those concerns are intended to be dealt with - and we take the discussion from there," she added.

Success, Bernard suggested, will depend, at least in part, on cool heads prevailing.

"We have to come from the assumption that, because there has been so much heat, for want of a better word, we have not communicated as effectively as we could. And, of course, naturally the director general would want to get a full understanding as to exactly why the community is so adamant in the position they hold," she said.

"Also, we have an obligation to again put on the table that it is not a 'cut and clear' case of our taking resources for the project ... and reallocating them to something different," Bernard noted.