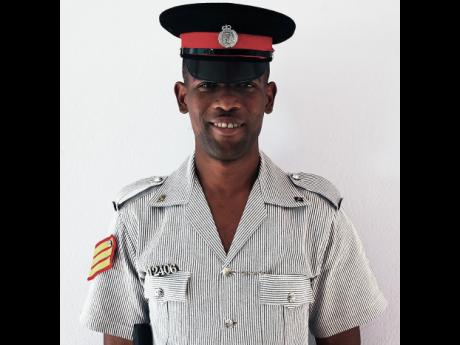 Orantes Moore
Second runner up at this year's Lasco's Police Officer for the Year competition and the Sergeant in charge of Castleton police station in St Mary, Christopher Ward.

For some time now, friends and colleagues of police sergeant Christopher Ward have boasted that he is one of the country's best officers, and earlier this week, their assertions were confirmed when he was declared second runner-up in LASCO's 15th annual 'Cop of the Year' competition. Ward joined the Jamaica Constabulary Force (JCF) in 2006 and seven years later, took a post as Sergeant-in-Charge of the police station at Castleton, St Mary; the parish where he grew up and attended school.

Although the title of Jamaica's 'Top Cop' eluded Ward, the amiable sergeant says he is humbled to know that members of the community where he works nominated him for the contest. He told Rural Xpress: "Taking part in the LASCO competition was great, and it is satisfying to know that out of 14,000 police officers in the JCF, I finished in [the top three]. I had a wonderful time and am looking forward to working closely with the winner [Sergeant Ava Lindo]."

Last year, LASCO named St Mary-based civil servants Sergeant Hodel Harris and Anieta Bailey as 'Top Cop' and 'Teacher of the Year', respectively. Now, Ward has been rated as one of the brightest stars in the JCF's ranks. It would appear the parish is producing a disproportionate number of first-class professionals who are dedicated to progressive development, which can only be a good thing. Ward agrees: "St Mary was always be looked upon as a poverty-stricken parish where there is not much going on, but we're demonstrating that St Mary is a parish to be reckoned with.

"Young people understand the need for change and, as such, the work individuals like Sergeant Harris and Miss Bailey do is very important. "Harris is a very hardworking and humble product of St Mary, who realised she needed to show people that we epitomise change and what it means to be successful.

"Likewise, I've been affiliated with Miss Bailey for a long while and know she makes a tangible contribution to community development. Great things are happening in St Mary and we intend to continue this." Ward owes much of his success to innovative policing strategies that engage young people and members of the community who are normally reluctant to speak with the police. He is a staunch advocate of community policing and proudly acknowledges that St Mary leads the way in this novel style of law enforcement.

Ward explains: "For many years, the JCF was mostly operationally driven; what you would call hardcore policing, but that couldn't last forever because, in all honesty, people's human rights were breached in some of those operations.

"For you to procure vital information, you must be able to communicate and forge partnerships because those roles are vital in crimefighting. Against that background, community-based policing is productive because it bridges the gap between the youths and the police.

"I'm based in Schoolhill, which was on the national hotspot list when I took command of that area, because in 2013, there were two murders, shootings, anti-social behaviour and a lot of community disorder.

"I realised a new strategy was needed to curtail and remove that level of violence, so we sat down with the team at Castleton, introduced community policing, and after six months, Schoolhill was removed from the list. A community police youth club was established and now it's one of the safest areas in Castleton."