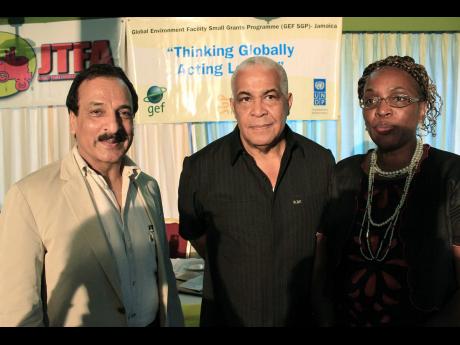 A PIONEERING group of farmers in St Mary are gearing up to launch an extraordinary community regeneration project after receiving a string of international accolades over the last two months and a grant worth more than US$60,000 from the Caribbean Development Bank.

On two separate occasions since February, the United Nations (UN) has honoured the Jeffrey Town Farmers' Association (JTFA) with certificates acknowledging their commitment to sustainable rural development, and in March, the organisation was awarded US$65,000 as part of a new Disaster Risk Reduction (DRR) project.

According to the JTFA secretary, Ivy Gordon, who was invited to Belgium in February to speak with a delegation of international diplomats about DRR, a large portion of the funds will be used to provide local homes with water tanks and improved gutters and roofing.

She told Rural Xpress: "We were awarded the grant to do a series of things to increase the community's resilience. This will include looking at some agricultural aspects, education, and the sharing of information; but the bulk of the money will be spent on infrastructural work.

"Can you imagine, a little group of ordinary farmers will be employing a project manager, accountant, admin assistant and data operator on contract for two years?

"Then, we'll be able to employ people from the community to do the labour work, which there is a lot of. It's great because we'll be getting the work, the infrastructure and the education. I suspect this project will be a huge thing for this community."

Globally, the JTFA is recognised as a shining example of a proactive organisation working hard to make local communities more resilient against disasters.

Speaking recently at an event in Port Maria to celebrate the JTFA becoming the first group from the English-speaking Caribbean to receive the UN's Equator Prize for developments in sustainable community-based solutions, UN representative Dr Arun Kashyap said: "There was a lot of erosion and misuse of land in Jeffrey Town, but the JTFA galvanised the community and changed all that.

"They are pioneers, leaders and champions because they have learned to build their capacity to be very good and innovative farmers, which contributes to the national development and the quality of life for every household and family."

Looking ahead, Gordon believes the grant will help transform Jeffrey Town and drastically increase the amount of produce the association cultivates annually.

She explains: "If the people are wise, they should be able to improve the quality of their lives, not just for the duration of this two-year project, but over a long-term period. Through this project, we hope to see an increase in production from our farm and value-added goods, an increase in income, and an elevation in people's livelihoods.

"Last year, we planted just over five acres of Irish potatoes and are hoping to double or even triple that amount by 2017 because they grow well here and have become the base of our farmers' incomes.

"Also, we would really like to increase our food security by growing other starches such as dasheen and breadfruit. Then, we could dry and store some of these foods for our security and distribute some to the local basic school."