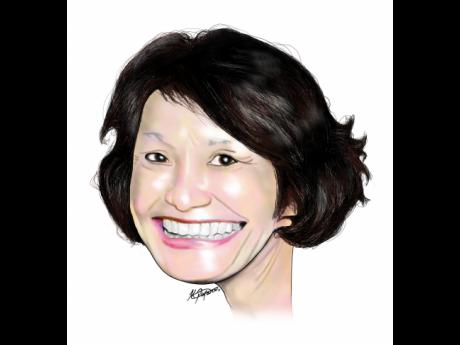 You'd hardly get away with calling Thalia Lyn, the woman behind the Island Grill chain of restaurants, a stuffy business woman. In fact, in many ways, she's very much the anti-business woman. Even with the remarkable success she's achieved in her career, it's not long before people, after meeting her, realise she doesn't take herself too seriously. And she loves to laugh.

"I'm blind and I can't spell. What else do you want to know? Ha!" she quipped within minutes of our meeting up for lunch in New Kingston last week.

Thalia Lyn is well known. She can scarcely walk a hundred metres without being recognised. "They call me the 'chicken lady!'" she laughed. "If I'm out somewhere and people want to say something to me, they say, 'you're the chicken lady!'"

Surely this must ruffle her feathers. "No it doesn't, you know. I don't mind it at all because it is just part of the goodwill that Jamaicans have for Island Grill," she said. "They are invested in the brand and when they see me they know they can come up to me and tell me their suggestions, offer compliments and even complain. It's not about Thalia Lyn for them; it's about Island Grill."

Lyn was born into a large family - nine girls and three boys - plus cousins, aunts and uncles, who created for her and her siblings, a network of support and constant motivation. It's her father - a first-generation Jamaica-born to parents who had emigrated from China - whose words seem to have stuck with her the most. She often references words of wisdom he shared with her over the years.

"He would say that there were a lot of us, and he couldn't afford to send us all to university. Nevertheless, we all had to go to university. That was not up for debate. So he would let us know that we had to work hard to ensure that we got scholarships," said Lyn.

Expectations were always high. "We had to get As. If we got Bs, it was tolerated but not encouraged and Cs were just unacceptable," she recalled.

"So I sometimes had a battle because even though I got a lot of As, I got Cs as well. I couldn't help it!"

Lyn said she was a generally capable student in her days at Immaculate Conception High, but has never quite got over the fact that a teacher once announced to the school how much of a disappointment her grades in a particular exam turned out to be. She laughs about it now, but you can tell the memory still stings. Nevertheless, Lyn succeeded in earning a scholarship and attended Manhattanville College in the United States.

Lyn said her father pressed all his children to work hard, but, on education, was particularly adamant that the girls had to excel.

"He would tell us that the boys would go into the family business (Purity Bakery) but the girls would have to become educated and elevate themselves so that when we were ready to get married, we could attract worthy suitors."

She got married at 21 to airline pilot Michael Lyn. The two are today closing in on 50 years of marriage. Michael, highly regarded for his cooking skills, is retired now and has opted for a slower pace at life, even though he still participates in the running of Island Grill. Thalia, though, is as active in the business as ever and is excited about growing the chain in the coming years.

Among her goals is to reopen an Island Grill restaurant in the United States. The first highly-heralded opening of the restaurant in the States had taken place in 2001, but the economic pressure of the September 11 terrorist attacks was too much for the new company to withstand.

"It was painful having to close that restaurant. It was so beautiful and I know it would have done well. If we had just planned properly and had the capital to hold strain, I know that we could have picked up again," said Lyn.

She looks back at that episode as a lesson learnt. "The mistake I made was not planning a proper strategy. That's what I learned from that mistake. I realised that I needed to be more strategic. If I was more strategic in the beginning, I probably would have been able to hold strain and kept the restaurant open during that crisis," said Lyn.

It's advice she offers to younger entrepreneurs.

"Always take the time to develop a clear strategy. Be sure that in any venture you undertake, you have it clear in your head what your strategy is. You have to be bold and you have to ensure you retain your morals. My father used to tell us if that even if we are not rich, we have to make sure we have a good name. That, in the end, is the way to achieve real success."