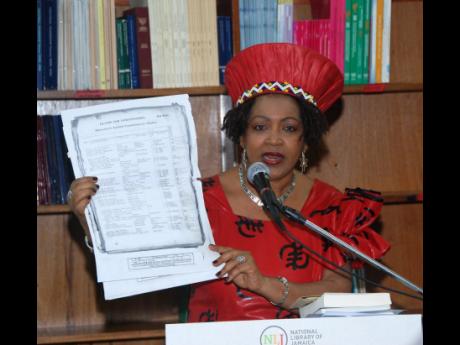 SCORES OF reparations advocates, Pan-Africanists and social justice activists from the United States, Canada, Latin America and the Caribbean will gather in New York City this week (April 9-12) for an historic Reparations Summit which will see the formal launch of the National African-American Reparations Commission (NAARC).

Among the participants will be leaders of national reparations commissions, committees and task forces from 11 Caribbean Community (CARICOM) countries, led by Sir Hilary Beckles, chairman of the Caribbean Community's Reparations Commission and including Jamaica's Professor Verene Shepherd.

Both will deliver feature addresses at the three-day summit to be held across three of New York City's five boroughs - Manhattan, Brooklyn and Queens. Other keynote speakers include civil rights leader, Reverend Jesse Jackson, and Mireille Fanon, chair of the UN Working Group of Experts on Peoples of African Descent and daughter of Frantz Fanon, the Black liberation theoretician from Martinique.

purpose of the Summit

The purpose of the Summit is to advance discussion and debate around reparations issues and provide a platform for advocates from around the world to support and reinforce each other's campaigns. It is being hosted by the recently established NAARC, comprising some of the leading scholars, activists, attorneys and historians in Black America and follows closely on the establishment of a European Reparations Commission.

CARICOM has been credited with re-energising the global reparations movement following the unanimous decision by its leaders to demand reparations from former European colonial and slave-trading powers. CARICOM's 10-point programme for 'reparitory justice' is framed as a development strategy to use reparations payments to deal collectively with economic and educational challenges facing the Caribbean. Jamaica has been the most forthright among Caribbean nations in demanding reparations when Parliament voted unanimously in January of this year to seek payment from Great Britain and to take the case of genocide to the International Court of Justice.