Agri-Expo empowers women and the youth 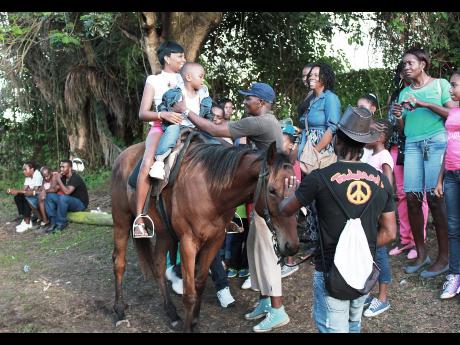 Orantes Moore
This mother and her son gear up for a horse ride during the agri-expo in St Mary on Monday.

CROWDS OF happy consumers and agriculturalists on Monday teemed into Gray's Inn Sports Complex in Annotto Bay, St Mary, for the 29th staging of the parish's annual Agri Expo.

This year's event, which featured an amateur wrestling match, races and livestock competitions, ran under the theme 'Empowering Women and Youth' and attracted thousands of farmers from across the island.

Governor General Sir Patrick Allen, who was unable to attend, but whose speech was read to the crowd by the parish's acting custos, Colonel Errol Johnson, said: "Women account for a significant number of the labour force: over 30 per cent of those engaged in agriculture.

"While their role has been traditionally limited to labour-intensive activities, such as reaping and weeding, more and more women are becoming involved in the entrepreneurial side of agriculture and agro-processing.

"As farm-owners, operators and factory managers, women are well poised to dominate the scientific aspect of the industry as more assertive and adventurous young people pursue career opportunities in the field.

"Affirming the role of women in agriculture through greater access to arable land, financing and technical support is a sure confidence-booster that will have a ripple effect well beyond the farm.

"As output increase, so too will their earning power and ability to provide for their children and families; promoting their advancement contributes to national development."

Mumpie Walker, a patron who attended the event with her small son Dhavid, said the event appeared to be growing in popularity following a drop in numbers during recent years.

She told Rural Xpress: "I've been coming here since I was a kid and think today was very good because a lot of families came out to shop around and there were lots of events for the children.

"This event is improving because they are starting a little earlier and have a lot more things to do for the children. And I think the theme is a good idea too because there are a lot of young people studying how to farm, but they need support."