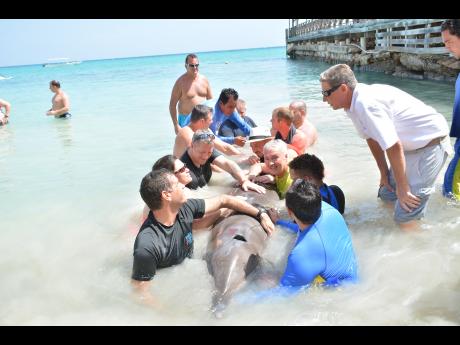 Members of the RIU Ocho Rios team, veterinarians and guests attend to an injured whale which beached itself at the hotel this morning. 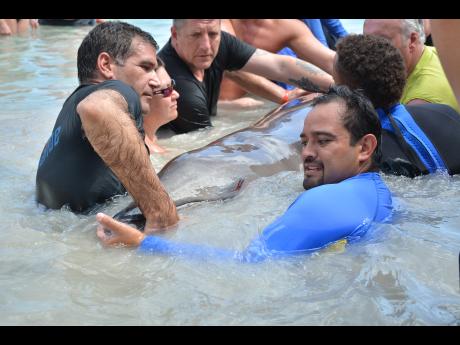 Members of the RIU Ocho Rios team, veterinarians and guests attend to an injured whale which beached itself at the hotel this morning.
1
2

An injured whale weighing approximately 400lbs was found floating near the beach at the RIU Club Ocho Rios, St Ann this morning.

The mammal, 14 feet long was rescued by a team from the resort, and treated by doctors attached to the Dolphin Cove attraction in the resort town.

"She was badly injured, but we administered medication, did a blood test, which was sent to the lab and found out she was strong enough to go back into the ocean," veterinarian, Dr Mishka Stennett told The Gleaner.

The veterinarian, who is employed to Dolphin Cove said the whale was guided by the RIU Scuba Caribe team back into the deep area of the ocean.

According to RIU's general manager, Katharina Doehler, the whale was seen floating against the hotel's pier at 9 a.m.

"Quick action by our team, allowed us to call in a medical team," Doehler stated, thanking the Dolphin Cove for its assistance.

"The Dolphin Cove team was fantastic. They really know how to care for the mammals who live in the ocean," she said.