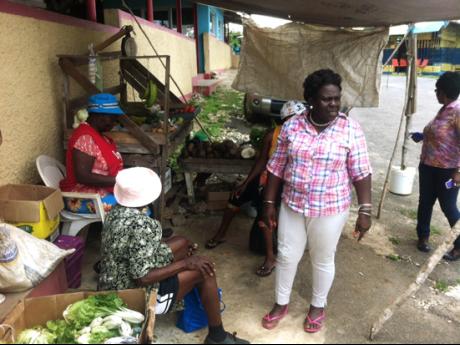 Ruddy Mathison
Jobson-Grant conversing with vendors at the Ewarton market on Wednesday.

Beverly Jobson Grant has now completed two terms as councillor for the Ewarton division of the St Catherine Parish Council. During her tenure, she has devoted herself to the economic development of the area, focusing primarily on employment prospects as well as creating opportunities for children to get education, and improving vital amenities.

Describing her upbringing as being 'grown by the community', Jobson-Grant received her early education at the Jericho Primary School and later at York Castle and Ferncourt high schools before moving on to teachers' college and then university

She served as a principal of the Pollyground Primary School before making her transition into representational politics on the advice of community members, whom she said have an undying love for her.

"For me, the transition to politics was not difficult. I had the confidence of the people and my training in community development acquired through my association with the Peace Corps, made the process rather smooth," Jobson Grant told Rural Xpress, adding that she chose the ruling People's National Party as the vehicle for her to provide her service.

She pointed out that she also benefited from being taught to serve at an early age by her parents, who embraced the Methodist religion and applied the teaching of sharing espoused by the church.

"I embodied the principles of transparency and accountability and this is why I set up proper systems in the division to ensure that everyone benefits from the programmes and opportunities that are available," Jobson Grant stated.

According to the two-term councillor, the economy of Ewarton has improved since she started representing the area, pointing to new retail businesses coming into the division - the renovation of the market; the resuscitation of the community Centre; establishing a homework, life skills, and reading centre for all the community members who wish to absorb the opportunities presented. She added that the people in Ewarton are very self-reliant, so by creating the environment, a number of small businesses have also come on stream.

Jobson-Grant cited the paving of sidewalks, making them disable-friendly as a significant accomplishment.

Despite this, she feels that a lot more can be done to create economic independence for the area. "Ewarton is a farming community and I am now focusing on a food-processing plant to serve the fruit farmers, who wish to go into agro processing, and with the decriminalisation of ganja a lot can be done for Ewarton," said Jobson-Grant.

She disclosed that Ewarton has long benefited from an informal ganja trade and now that moves are been made to carry out research on the plant, she will be lobbying for the many farmers who have long been involved in growing the plant illegally, to get formal recognition from the University of the West Indies to grow their crops for research purposes.

Jobson Grant said she envisages a situation where young people in Ewarton, some of whom are scientific minded, can create employment for themselves and the community from this trade. She suggested the reopening of the Charlton's Farms to establish green houses and a centre where research can be carried out.