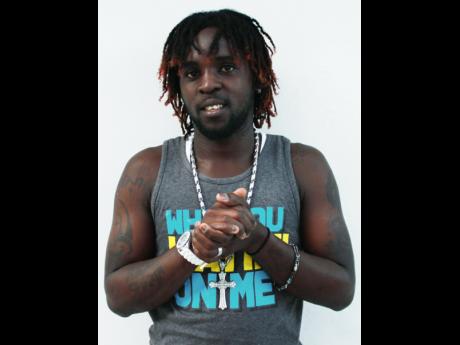 A man from St Mary, who unexpectedly lost two family members in one month has written and released a song that aims to reduce the number of lives lost every year to careless driving and bad health habits.

Guylan 'Zuppy Dan' Gordon recorded the song, Never Dat, last year, after his great-grandfather died from prostate cancer and his grandmother was killed in a roadside car crash close his home in Boscobel.

Gordon, 22, says writing the song turned out to be therapeutic and helped him get over the grieving process. He told Rural Xpress: "I was inspired to write Never Dat based on what I felt at the time and the vibes I was getting because I was so sad at losing two close relatives in the same month.

"Every time, I went out onto the road, somebody would ask what happened to either my great-grandfather or my grandmother, so I decided that rather than having to keep explaining, I would write a song and try to promote it, so everybody could know what transpired."

In Never Dat, which can be heard on YouTube and purchased at iTunes, Gordon reveals how he was hanging out with friends outside of a local bar and actually witnessed the car accident that killed his grandmother.

He explained: "She was coming from work and stopped on the road to have a conversation when a car got out of control and hit her and the two men she was talking with, and threw them into a gully.

"At the time, I was sitting across the road, drinking and laughing, when I saw somebody fly up in the air and I thought 'Wow, who was that?' I walked over, helped lift one of the men out of the gully, and put him on the sidewalk.

"Then we went down to help the other man, but his neck, feet, and back were broken. We thought that was it, but someone started to say three people were knocked over and he looked at me and said: 'It was your grandmother', but I didn't believe him.

"We went back, found her and put her in a taxi to St Ann's Bay Hospital. Everyone was saying she was OK, but when they carried her in to do tests and an X-ray, she left us."

As a result of the experience, Gordon is calling on drivers to be more cautious when they are behind the wheel. He said, "I really advise people to take their time on the road and stop the drunk-driving because the person who struck down my grandmother had been drinking.

"You shouldn't have to speed to get to your destination. If you're going somewhere, prepare yourself, leave out early and take your time."

Similarly, in the song, Gordon, who is planning for the release of his next single, Reality, warns against the dangers of undiagnosed prostate cancer and urges all man, irrespective of their age, to get frequent tests for the disease.

He said: "Every man has the potential to get cancer, so you need to check yourself regularly to ensure that you're healthy.

"Most men don't want to check their prostate because they are afraid they might hear negative results, but you should do it because you don't want to wait until it's too late."