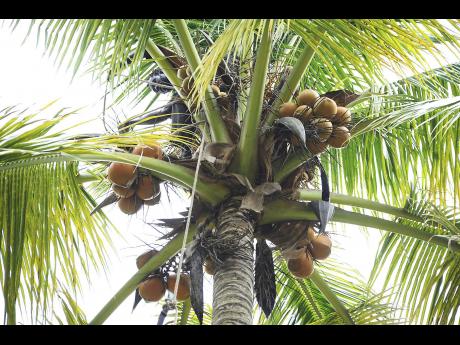 THE DEVASTATING impact of the drought during the first six months of last year combined with the ongoing failure of some farmers to implement good agricultural practice is being blamed for the reduction in the size of coconuts on most properties.

With coconut production for 2014 calculated at 98.5 million nuts showing just a small increase over the 2013 figure of 97.4 million, lack of fertiliser, improper agronomic practices and deaths of more bearing coconut trees from lethal yellowing and other diseases were the main causes identified.

Despite this, the Coconut Industry Board (CIB) recorded a significant increase in the amount of seed coconuts exported to Florida, which stood at 52,200 with freight on board (FOB) value of US$169,050. This is more than double the 21,000 exported the previous year which had an FOB value of US$64,600.

These issues are expected dominate the agenda during Saturday's annual general meeting of coconut growers scheduled to take place at the Jamaica Conference Centre in Downtown Kingston.

Other matters of particular interest to the farmers will be updates on the research into new disease, coconut varieties, as well as progress in pest and disease control.

The search for high-yielding, disease-resistant varieties continued with hybridisation activities at Barton Isles Seed Garden in St Elizabeth and Esher Seed Garden, St Mary, with emphasis on monitoring of the Brazil Green Dwarf and its hybrids (Brapan and Maybraz) for their potential to increase local production.

In addition, the CIB also received 101 seed coconuts of a tall variety as a gift from the Government of Thailand. These seeds were set at Barton Isles, St Elizabeth, of which 73 germinated. Some of these seedlings will be planted in field genebanks in order to assess their resistance/susceptibility to lethal yellowing disease, and a few will be planted at the Hope Botanical Gardens.

Meanwhile, the monitoring of incidences of lethal yellowing disease and its spread islandwide continued, with special emphasis on outbreaks in east and west Portland. Additional surveys were conducted on selected farmers' holdings, along with assessment of the impact of information given to farmers on important aspects of the disease.

With regards to the bark beetle, xyleborus ferrugineus, surveying procedures and control strategies have been implemented, and pheromone traps installed which are being monitored in the affected areas. In addition, meetings and seminars were held with various stakeholders, as well as a public education campaign inclusive of the distribution of posters and brochures.

The bark beetle was first discovered on coconuts at a farm in Clarendon, and has been observed since then at certain locations in the parishes of Hanover, St Mary and Portland. It has infested the tree trunks, dry and jelly coconuts, and is associated with a fungus found on dry coconuts.