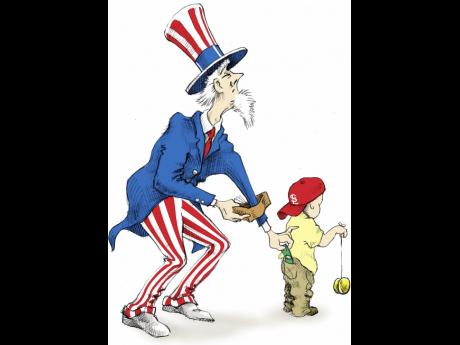 Born in the '70s, I grew up hearing that thanks to then Prime Minister Michael Manley, no more bastard nuh deh. Until very recently, I thought this meant that the status of illegitimacy had been totally revoked in Jamaica; however, my eyes were opened when I came across a recent immigration decision coming out of the United States that proved my understanding somewhat wrong. In the paragraphs that follow, I will look at the decision.

On February 12, 2015, the Board of Immigration in the US heard an appeal from a Jamaican young man, Oshane Cross, who had been ordered removed from the States in 2011, having been convicted of burglary in Connecticut. The young man sought to have the proceedings terminated on the basis that he became a citizen of the United States when his father became a citizen in 2001.

On September 2, 2000, at the age of 12, Cross legally entered the US on the application of his father, who had never married his mother and who had previously migrated to the US. Thereafter, the young boy lawfully resided in that country with his father as a permanent resident.

The questions before the Board of Immigration, as Cross sought to challenge the order to have him removed to Jamaica (a faith, we know, worse than death for many Jamaicans living in the diaspora), were whether Cross was a citizen of the US (and if so how had he become such) or whether he was merely a permanent resident, in which case there would be no legal barriers to removing him.

However, if the status of his father had not automatically passed to him in 2001, then Cross would have retained the status of permanent resident and so could be easily deported for breaking the laws of Connecticut.

The Board of Immigration ruled that when Cross' father became a citizen in 2001, his status automatically passed to his minor son. The ruling, therefore, opens the door for more Jamaicans to not only resist deportation applications, but to also claim the benefits and rights of US citizens.

Immigration and National Act (US)

What makes the decision particularly noteworthy, however, is that it represents a significant about-face on the part of the Board of Immigration as it pertains to the interpretation of a particular section of its Immigration and Nationality Act.

Section 320(a) of the act provides that a child born outside of the United States automatically becomes a citizen of the US when all of the following conditions have been fulfilled:

1. At least one parent of the child is a citizen of the United States whether by birth or naturalisation.

3. The child is residing in the United States in the legal and physical custody of the citizen parent pursuant to a lawful admission for permanent residence.

Before the ruling of the Board of Immigration, consistent with the then prevailing school of thought on how Section 320 (a) was to be interpreted, another tribunal, hearing Cross's application to stay in the US had concluded that while he had clearly satisfied conditions 2 and 3 (above), he had not satisfied the first condition, that is, Cross was not be regarded, in law, as the child of his father!

The reason for the first tribunal arriving at such a preposterous conclusion was in part due - to state it baldly - to the fact that the status of 'bastard' is still legally recognised in Jamaica. To determine whether Cross was the 'child' of his father, the first judge (or immigration judge/tribunal) turned to the definition of 'child' in the act.

Briefly put, the relevant section defines 'child' as meaning an unmarried person under 21 years of age, including a child legitimated under the law of the child's residence or domicile.

When the immigration judge looked at the laws of Jamaica, he came across the Legitimation Act (I had not realised myself, until I read this decision, that there was such a law still on our books). This legislation makes marriage between a child's parents a prerequisite for the child to be deemed "legitimated".

The immigration judge, therefore, concluded that since Cross was not a "legitimate" child under the laws of Jamaica, he could not be defined as a child of his father for the purposes of the Immigration and Nationality Act of the US. There, he failed the test of condition number 1 (above).

Appeal hearing before the Board of Immigration

On appeal, however, the Board of Immigration, thankfully for Cross, decided to step back from the Immigration judge's interpretation of 'child' (notwithstanding that the very approach had been applied in several earlier cases). The board accepted that even though there existed in Jamaica a Legitimation Act, which suggested that Cross' father had to have married his mother for the son to be deemed 'legitimate', no such affirmative action would be regarded by the board as necessary.

Legitimation, the board concluded, in the circumstances of the particular case and others like it, was to be taken as meaning that a person born abroad to unmarried parents could be defined as a 'child' for the purposes of Section 320(a) if he or she was otherwise eligible and was born in a country or state that had eliminated legal distinctions between children based on the marital status of their parents.

In Jamaica, by virtue of the Status of the Children Act, the legal distinction between legitimate and illegitimate children had largely been removed, even though legally, the status of 'legitimate/illegitimate' still existed in Jamaica.

Since there was no dispute that Cross was the biological child of the man through whom he sought to derive United States citizenship, or that he was born in Jamaica after the 1976 effective date of the Status of the Children Act, further, since the record did not contain any evidence to suggest that Cross was not in his father's legal custody at the time of his legitimation, accordingly, his appeal was sustained and the removal proceedings against him terminated.

A happy ending for Cross and hope for many other Jamaicans in similar situations.

Frankly, I wish the Board of Immigration could come up with many such novel reasonings and so keep persons who have spent a lifetime in the US from being deported to Jamaica after they have broken the laws of that country! Keep them, I say!