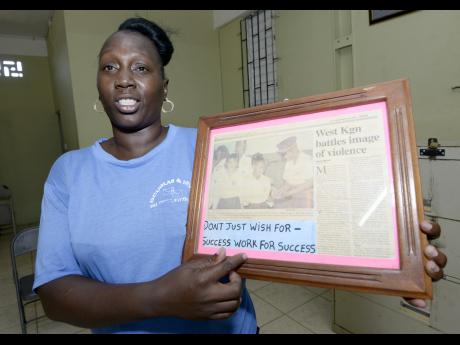 Karen Linton, a former member of the Presidential Click Youth Club, shows a framed copy of a 2003 Gleaner story highlighting the achievements of the group. 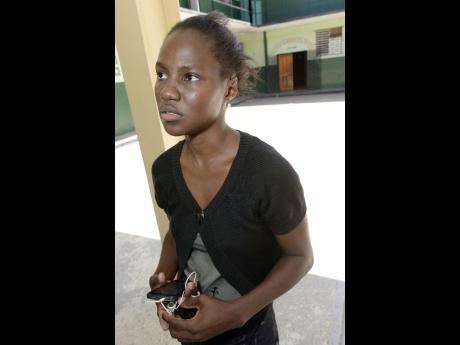 Former members of the Presidential Click Youth Club in the west Kingston community of Tivoli Gardens are rejecting claims by former Commissioner of Police Owen Ellington that their club was formed only after a compromise between police and gangsters.

Ellington, while giving testimony at the West Kingston Commission of Enquiry recently, stated that numerous attempts by the police to organise a youth club in the area were thwarted by gangsters.

He said the youth club was formed only after a compromise was struck where the club was to be known as the Presidential Click Police Youth Club.

But the former club members told The Sunday Gleaner last week that Ellington was either not knowledgeable of the origin of the youth club or was being deliberately misleading.

Oral Martin, a former president of the club, charged that no attempt was ever made by the police to set up a youth club in the community and it was not until residents decided to form the organisation in 2002 that the police came on board.

"I don't know what Mr Ellington is talking about, but the Presidential Click Youth Club had three founding members and all were from within the community. It was formed on the basis that youths in the community should be occupied and doing something positive.

"About three years later, the police came on board, and the club was rebranded and the police was added to the name making it the Presidential Click Police Youth Club. That was in an effort to build a stronger relationship with the police, but before and after that launch, we were fulfilling our social responsibilities," argued Martin.

"We had set up a computer lab in the community centre and used to have medical teams come into the community to do medical checks and dental checks. Our members also volunteered outside of the community. For example, we used to have a treat for the elderly residents of the Denham Town Golden Age home every Labour Day. We also used to visit the SOS Children's Village in Stony Hill, to bring them bun and cheese and sometimes books and bags for the children," said Martin.

Officials at the SOS Children's Village confirmed that it was a recipient of the Tivoli group's benevolence, even though the club members have not visited in recent years.

However, Kadian Brown, who served as the public relations officer of the club before it was renamed the Tivoli Gardens Police Youth Club following the 2010 operation by the security forces, said, since then, the charitable efforts of the club have been stymied by the lack of support.

"To be honest, things were much better then, because the level of support that we got from the police and from business entities was phenomenal. A big part of our fundraising for these activities was from contributions we received from corporate entities, as well as socials that we used to have in the community.

"But those aren't happening any more, and so the club is really struggling. We don't even have a place to meet, so we can't really do the things that we used to do before," argued Brown.

She charged that the lack of activity by the rebranded club had caused many of its former members to become demotivated and to drift into criminality.

"The rising crime in the community is as a result of the inactivity of the youth club, so we are really hoping that we can get back that support from Senior Superintendent Cornwall 'Bigga' Ford, to help us to really motivate the youths in the community in the way the former club used to, before the incursion," said Brown, as she referred to the cop who now heads the West Kingston Police Division.