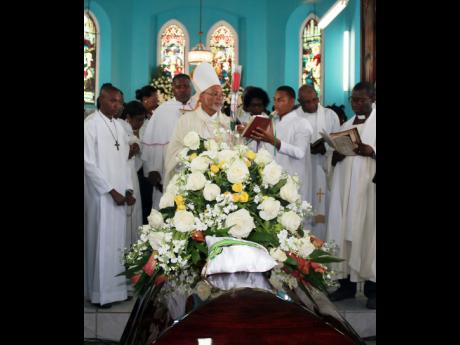 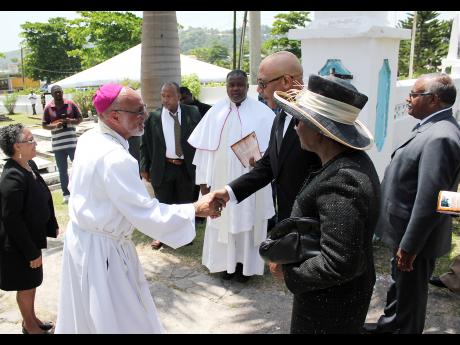 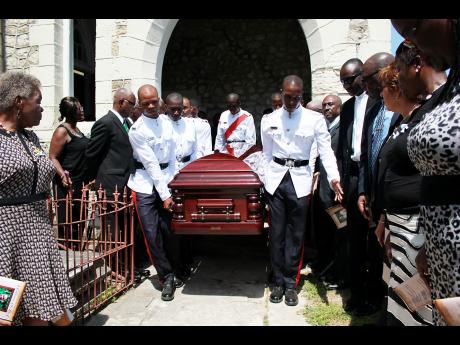 Orantes Moore
The casket with the body of the late custos, Jeffrey McKitty, is carried by members of the Jamaica Constabulary Force (JCF), from the St. Mary Parish Church, to the hearse, shortly after the funeral which was held on Saturday. 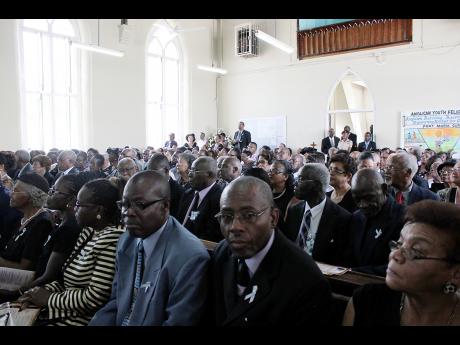 Orantes Moore
Hundreds of mourners packed into the St Mary Parish Church in Port Maria for the funeral of Custos Rotulorum for St Mary, Jeffrey McKitty, on Saturday.
1
2
3
4

Hundreds of mourners paid their last respects to the popular hotelier and custos rotulorum for St Mary, Jeffrey McKitty, who passed away last month following a lengthy battle with prostate cancer.

"He was a recipient of the Governor General's Achievement Awards and, Custos McKitty was very anxious to mentor young people to the point where they themselves could become awardees of this programme," said Governor General Sir Patrick Allen, while addressing the crowds that crammed the St Mary Parish Church in Port Maria, on Saturday.

The governor general further said that McKitty firmly believed in the principals and objectives of the I Believe Initiative and endorsed its motto which says 'There is nothing wrong with Jamaica that cannot be fixed by what is right with Jamaica'. He stressed that the eminent American psychologist, Dr Edwin Shneidman, said: "Mourning is one of the most profound human experiences that it is possible to have. The deep capacity to weep for the loss of a loved one and to continue to treasure the memory of that loss is one of our noblest human traits".

"As today, Lady Allen and I, the staff at Kings House, and all our custodes mourn Mr McKitty's passing and appreciate even more the measure of the man, we thank God for his sojourn among us. Custos, the Honourable Jeffrey Lorenzo McKitty; gone, but never forgotten. May he rest in peace," Sir Patrick concluded.

The custos was later interred at the St Matthews Anglican Church in Boscobel.

His sister, Pauline McKitty-Robinson, in her tribute, described him as a family man.

"First and foremost, I see Jeff as a family man. He loved his family profoundly and always looked forward to spending quality time with them. He attributed his successes to the strong support he received from his wife Yvonne and daughters Keisha and Nadia. Jeff was a very devoted husband, son, father, father-in-law, brother, brother-in law, friend and mentor who touched so many people's lives during his time here with us, as evident by so many of you being here today," said McKitty-Robinson.