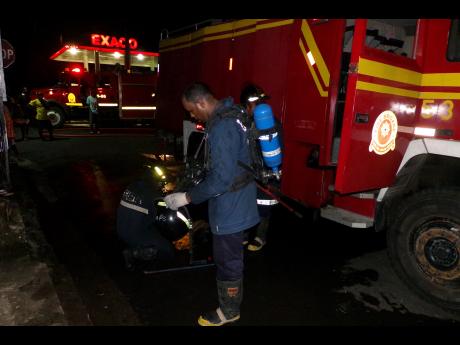 A firefighter with an oxygen tank prepares to enter the commercial complex at the corner of Blake and William streets. 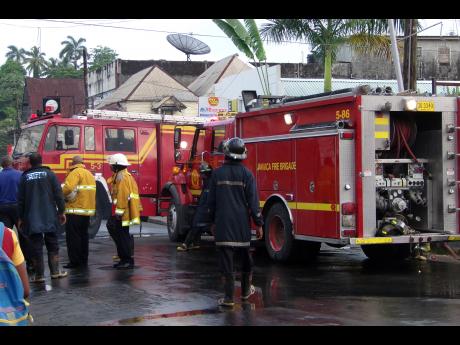 Firefighters near the end of the task in Port Antonio, Portland this morning. 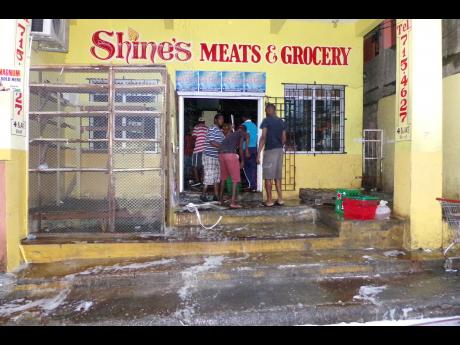 Workers at Shine’s Supermarket cleaning up after the fire.
1
2
3

Firefighters battling a major blaze at a commercial complex on the corner of Blake Street in Port Antonio, Portland early this morning had to resort to pumping water from the sea to put the fire because the hydrants were dry amid the usual water lock-off in the parish capital.

The fire, which started about 2:15 a.m consumed the top section of a two-storey complex, destroying a restaurant and damaging a store house, a supermarket and a bathroom area.

"We were severely hampered in our efforts," said District Officer of Portland Fire Department, Wade McDermott.

"We had to call in back-up from Buff Bay, some 18 miles away. Realising that the water was turned off, we had to pump water from the sea, which is approximately 100 meters from the blaze," he said.

According to the District Officer, the loss incurred by business owners and operators is hefty, although an actual figure could not be immediately given.

He said while the risk was extremely high, the structural damage could be quite significant, as several explosions took place on the top floor of the commercial complex.

Stephen Williams, a senior employee at Shine’s Supermarket, which suffered damage to its storehouse, cafeteria and its office area, said the loss of perishable and non-perishable goods could run into millions of dollars.

While the firefighters fought the blaze, a large crowd gathered along William Street with many staring in awe.

The entire top section of the building has been virtually destroyed with minor damage to its second floor including a cosmetic store and a store room.

Shine’s Supermarket, which is on the ground floor, was also affected by fire, and the intense heat also damaged a significant amount of stock.