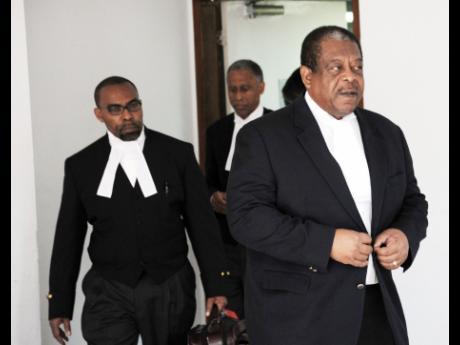 File
CCJ President Dennis Byron (right) departs the Jamaica Conference Centre after a session of the Shanique Myrie case. The Myrie decision has implications for immigration law and procedure across the Caribbean.

The House of Representatives has voted for Jamaica to leave the United Kingdom-based Privy Council and establish the Caribbean Court of Justice as Jamaica's final Court of Appeal.

Before the final vote in the House, the Parliament had resolved itself into a committee to decide on the substantive bill and three accompanying ones.

On the occasion of each of the accompanying bills, the Opposition called for a divide but was out-voted 41-21 every time.

The crucial Bill to amend the Constitution to make the CCJ Jamaica's final appellate court was next.

It required a two-thirds majority and so this time, the House Speaker Michael Peart added to the Government numbers to make the vote 42-21, sending the matter to the House to be reported as having been passed without amendment.

Government members stood and thumped their desks in celebration.

But the route to the passing of the bill in the House would not be smooth, Opposition Member , Desmond McKenzie, halted the flow to find out why was there an apparent rush.

Despite interruptions by Government members, McKenzie pressed on until he was eventually over-ruled by the House Speaker.

On the third reading of the Bill the Opposition again called for a divide but was out-voted 41-21.

The matter now moves to the Senate.

The Government will need to sway at least one Opposition senator three weeks from now or else the effort to make the CCJ the final court of appeal will fail.