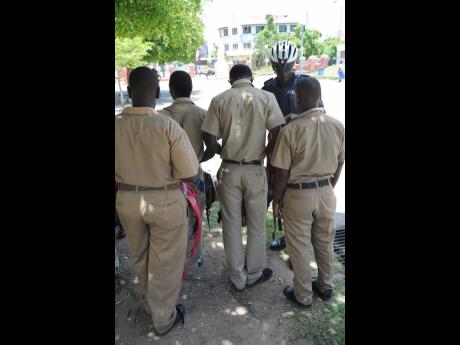 There was an uptick in violent incidents in the island's schools last year despite several measures designed to keep students in check.

The Jamaica Economic and Social Survey for 2014 is reporting 438 violent incidents on school campuses last year, compared to the 298 reported in 2013.

The almost 50 per cent increase in violent incidents was compounded by a similar increase in the number of fights involving students on school compounds with 226 reported last year, up from the 168 reported in 2013.

There were also increases in the number or sexual offences, robberies and incidents categorised as 'Others' during 2014. There were marginal decreases in the numbers of thefts, wounding and murders, as only two students were murdered on school campuses in 2014, a decline from the four who lost their lives the year before.

Students were also more prepared to do battle in 2014 than the previous year, as searches conducted on and off school campuses led to the seizure of 536 dangerous weapons, a dramatic increase from the 302 weapons seized in 2013.

Despite the increases in the number of violent incidents, only 32 children were arrested in 2014 compared to 40 the year before. This was due to the police using alternative methods such as warnings and increasing the number of students being monitored to curb bad behaviour.

Just over 770 students were referred to the Child Development Agency and probation officers, an almost sevenfold increase from the 126 the year before.

The latest numbers should be worrying to the education ministry which last week announced that it had completed a revised School Security and Safety Policy Guidelines which should be in schools by September.

Director of Safety and Security in Schools at the ministry, Sergeant Coolridge Minto, reported that all policies pertaining to safety and security in schools have been reviewed and the document should be available to all schools and their deans of discipline.