Man with Jamaican roots to row for world's oceans 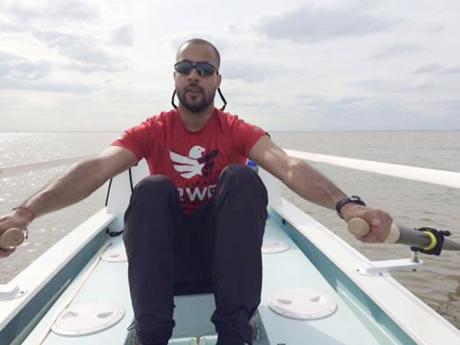 Over the years, people have found various ways to make a statement.

From the ice bucket challenge to raise awareness of Lou Gehrig's Disease or ALS to posing nude to protest against the killing of animals for their fur, celebrities and 'ordinary' people have found a way to champion a cause.

Perfecto Sanchez, a third-generation Jamaican, is looking to make his mark. In a story first published by Forbes, Sanchez and another rower will attempt to cross the North Sea, starting today. The journey is to raise awareness of the damage being done to marine environments and to raise funds to protect the seas.

Former GraceKennedy chairman and CEO, Douglas Orane, is a cousin of Sanchez, and explained the Jamaican connection. Sanchez's grandfather was poet George Campbell, who was an active figure in the political turmoil of the 1930s. His grandmother was pianist Odilia Orane Campbell, who played for the Dance Theatre of Harlem for many years. Sanchez is a former marketing executive for Evian Water and has also worked at both Kraft and Dannon. Before that, he served for six years as an infantry officer in the United States Army, doing two tours in Iraq.

According to the Forbes article, Sanchez said he felt happiest when fighting for something he believed in and protecting what he loved."

"While in the army, I chose to represent the freedom of this great country and in this next chapter of my life, I am choosing to be a better steward of the environment and to leverage my skills to drive awareness and action for good," he said.

While at Evian, he met with two endurance athletes planning to row across the Atlantic Ocean in December 2015, and was invited to join them for a training row. They told him part of the training would involve tackling the North Sea. This meeting corresponded with Sanchez's exposure to the work of Mission Blue, an organisation committed to preserving 'the blue heart of the Earth'. Mission Blue has more than 100 ocean conservancies as partners.

The approximately 200-mile journey will begin in the town of Burnham, on England's southern coast. Sanchez and his rowing partner will each row for eight hours a day, for between for four and five days straight before arriving off the coast of the Netherlands. Shipping vessels have reported swells as high as 50 feet. The water temperature currently registers 40 degrees Fahrenheit, or less than five degrees Celsius.

"Doing a challenging thing to raise awareness for a challenging situation makes perfect sense to me," he said in the Forbes story. "If each of us doesn't do what is in our power to do to protect our oceans and the beautiful world we live in, then we won't have that same world to pass on to future generations. Everyone has a part to play and this is mine."