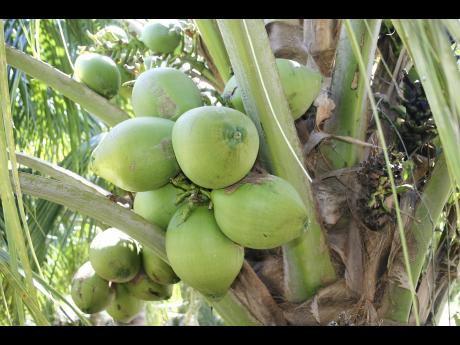 THE ISSUE of the ongoing scarcity of seed coconuts, which dominated the agenda during the recent annual general meeting of the Coconut Industry Board (CIB), is not likely to be resolved any time soon. The board was unable to provide a satisfactory answer as to when and how this crippling shortage would be addressed.

With members of the research team advising that local efforts in tissue culture as a viable rapid multiplication method for addressing the severe shortage is not likely to bear fruit any time soon, one farmer floated the idea of importing seed coconuts. Chairman Leonard Green immediately shot down this option on the ground that, despite its best efforts, the board might not be able to determine if the imported material will be disease-free or resistant to the devastating lethal yellowing.

"So it is risky going in that direction," Green advised.

Members then questioned the logic behind the CIB's continued exportation of seed coconuts to Florida instead of distributing them to local growers, with some 52,200 sold at a value of US$169,000 in 2014, a decision the board chairman defended.

"In order to be a viable coconut board, we need to make a little money, so we export a few seeds, make a little US dollars so we can keep ourselves going. It's not large amount of seeds. It's just a few trailer loads a year. And I must tell you, we have some regular clients overseas and some orders that we're obliged to fill, but its not a major source of earnings and is not a large amount of seeds."

Meanwhile, former CIB chairman Tony Hart has described as short-sighted and misguided the decision to continue exporting seed coconuts while being unable to supply the needs of local farmers. He described as fallacious the argument that it was a well-needed income-generating activity, since the cash-flush organisation thrives on the annual lucrative dividend from its investment in Seprod Limited.

Hart, who did not attend the meeting, was appointed chairman in 2011 and served for about three years before demitting office. He told The Gleaner by telephone, that he had put a ban on exports viewing it, as he does, as counter-productive in light of the ongoing shortage on the local market. In fact, he argued that distribution of the 52,200 seed coconuts to local farmers would have been a more sensible long-term investment, even with a minimum 70 per cent germination rate, which would have provided 3,600 seedlings for planting.

"At 100 nuts per tree and US$0.50, they (CIB) would have sold US$1,800,000 worth per year for the life of the tree of, let's say, 20 years. That is why I put ban on exports until the local demand was exhausted," the businessman shared with this newspaper. "I could understand if there was the need for money, but the board gets enough in dividends from Seprod to run its operations. So this, to me, is myopic and nothing to fuss about," he vented.