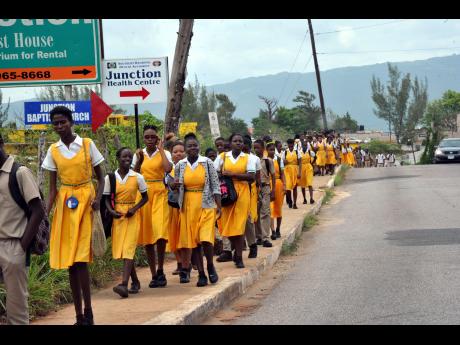 As a part of its bid to address the chronic shortage of high-school spaces in Junction and adjoining communities in south east St Elizabeth, the Ministry of Education is poised to convert two of the primary schools in the parish into high schools come September.

In addition to the space concerns, Parchment said the Ministry of Education's decision was further fuelled by high transportation costs for students to travel from Junction to schools in the neighbouring parish of Manchester, which was proving to be a major financial burden for parents.

"In terms of the educational opportunities at the high-school level, the available spaces here are not enough and, in the mornings, you still see lots of buses going up the hill to Bishop Gibson High, Manchester High School, and Decarteret College, transporting a number of students from this area," said Parchment.

The MP further explained that the cost of student travel was taking a heavy toll on the pockets of parents, many of whom have had to be making requests of him to assist them with money to cover transportation costs.

"It has a major impact on the parents in terms of transportation cost, so I will get the appeal for assistance with transportation cost and general requests for additional school spaces here in Junction," said Parchment. "So what the minister (Education Minister Ronald Thwaites) has done is that, we have two schools here in proximity that, come September, will be upgraded to high schools. When this happens, it will take some of the burden off the parents to send the children into the Malvern hills or up to Manchester."

The transformation of the schools will be done on a phased basis, with the schools accepting grade-seven students come September and then, over a six-year period, would gradually grow the high-school population while phasing out the primary cohort through graduation.

Parchment said parents who would be thinking of having their children registered in grade one in the affected schools for September are being encouraged to seek spaces at other neighbouring schools.

Parchment also announced that, in a bid to improve the contact hours between students and teachers and to stimulate greater academic performance at the B.B. Coke High, which is located in Junction, the school will shed the double shift system come September.

"A new classroom block is being constructed to facilitate the end of the shift system. So in September it will be full day school," said Parchment.