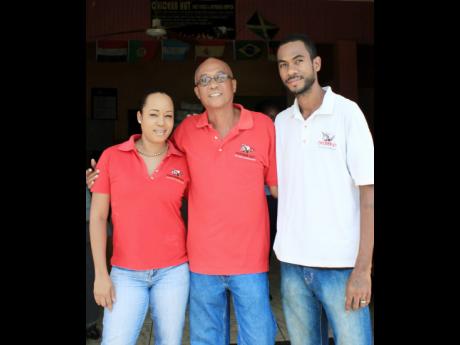 Orantes Moore
Michelle, Ian and Yhan Chin Loy outside their takeaway restaurant, Chicken Hit, in Port Maria, St Mary. There are lots of benefits to working with your family. It's all about helping each other. I'll pick up where my father falls short and my sister picks up where I fall short. It's good because we are all developing and benefiting from the growth of the company. 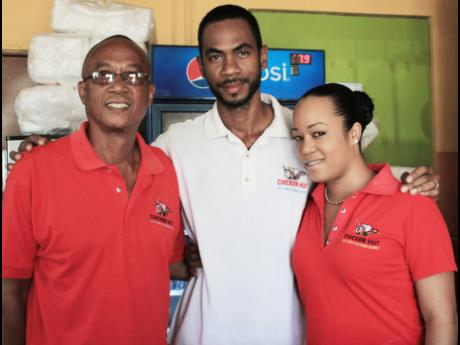 When sales executives Ian and Lucy Chin Loy decided to set up a takeaway restaurant in the heart of Port Maria, St Mary, the couple could not have imagined that 20 years later their business would have developed into one of the most popular fast food brands in the parish.

Chin Loy and his wife launched the Chicken Hut restaurant in the mid-1990s and found success specialising in chicken and chips meals and lunches for school children.

The business flourished, and today, the couple's children, Yhan and Michelle, have expanded their parents' idea into a second takeaway spot in nearby Oracabessa and a series of weekly branded entertainment events.

Chin Loy, 62, told Family and Religion: "Initially, my wife and I started this business, but she died in 2004, and little by little, our children have come into it; and now my son is the head chef and my daughter is the manager.

"My wife was a sales representative for Ramson's, selling foodstuff to supermarkets and hotels, and she was good at it. I was in the background, but she had a lot of personality and was always out front."

In the months following his mother's passing, Yhan, 36, resolved to joining the family business on a full-time basis and insists the decision is one of the best he's ever made.

He explained, "At the time, the business needed help and I like cooking, so I came. There was a chef here who showed me everything I needed to know and another came after that and I learned from him, too. That's how I got started.

"There are lots of benefits to working with your family. It's all about helping each other. I'll pick up where my father falls short and my sister picks up where I fall short. It's good because we are all developing and benefiting from the growth of the company."

Michelle, 31, agrees. She said "My mother got sick and I had to make a choice between running the family business and going to study in the United States. It was my dream to study pharmacy at the Florida International University, but I decided to stay here and be with my mum, and haven't regretted it for a moment.

"Of course, as a family, we have our differences and problems, but we always have each other's backs. Unity is the key because you have to be prepared to ride out the bad times, no matter what. Unity has to be there before you can even start thinking about going into business."

Chin Loy confirms the father-sibling trio sometimes disagrees, but is confident that he could never find a better pair of business partners. He explained: "It's definitely important working with my family rather than strangers because I feel more relaxed.

"You can't always be 100 per cent sure about your family, but it's better they take something from me than a stranger does (laughs). That's how I look at it."

He adds: "There are times when we kick off, but that happens with everybody. My wife was very instrumental in getting us to work together, because she was the bond who used to always tell the kids: 'Don't make anybody come between you guys; blood is thicker than water.' She was always drilling that stuff into them."