The death of nine-nights - Part 1 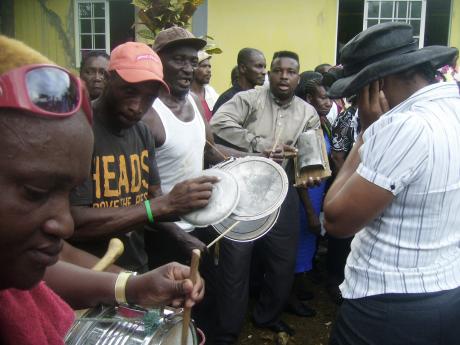 Paul Williams
Members of the Heart of Stone Gerreh Band performing at the celebration and thanksgiving service in Whithorn, Westmoreland, recently. 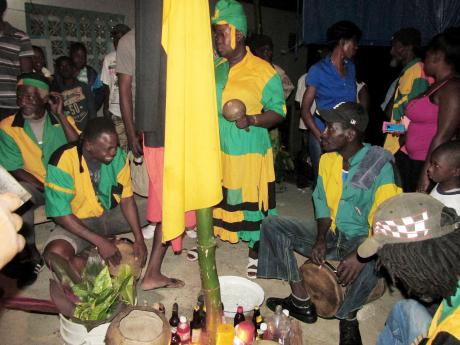 It is a tradition that dates to pre-emancipation, wakes and a nine-night to mark the passing of a loved one. But in many communities across Jamaica that has evolved to mirror more of a dancehall session than the tradition started by our forefathers. This week, we zoom in on nine-nights and wakes.

The wake involved people staying awake all night mainly to offer emotional and material support to the deceased's relatives and friends, while sometimes a 'nine-night' was observed nine days after the burial.

This was an important night, when the spirit of the deceased was given an 'official' final farewell.

This wake was particularly essential in the days when, in most parts of Jamaica, there were no morgues, so the deceased were kept at home until burial.

It was very difficult for some people to cope with the fact their deceased relative or loved one was lying dead in the house. So, while the body was awaiting burial, people set up all night with the deceased family.

As soon as the transition was made, preparation for burial started right away, for the body had to be interred before decomposition set in. It was a community process in which people assumed various duties ranging from graving digging, coffin making, and food preparation.

"And fulfilling the traditions with regard to the treatment of the possessions of the deceased," writes Ivy Baxter, in The Arts of an Island.

For the most part, the deceased's family did not have to spend much money as people offered their service free. It was customary for mourners to take food and other necessities to the family of the deceased. The mourners did not go expecting to be fed by the bereaved as they kept vigil. They went with food to feed the bereaved, and to offer financial support.

The set-up continued until the night before the funeral.

In St Mary, the process was called 'Dinkie Minnie', in western Jamaica it was known as 'Gerreh'.

The nine-night was less solemn than the other set-up nights. For, while it was to send the departed off to another realm, it was also to cheer up the deceased's family with singing, dancing, storytelling, riddles, ring games, and remembrances.

The proceedings were also more structured at the nine-night, starting about 9 p.m. with a prayer, sometimes in the room where the person died. There would be hymn and chorus singing accompanied by sundry instruments including, drums pot covers and graters.

The leader of the nine-night was usually a man who had a flair for excellent comedic and dramatic delivery, and singing the hymns in a particular way. He had to know the hymns or to be able to read them in order to 'track' them.

Tracking involved the leader reading a line and then the mourners sang, and stopped, waiting for the next line to be read. The tone of the singing, done with a drawl, was poignant, and mourners would sometimes get into the 'spirit', and contort their bodies.

"It [tracking] has come to be a recognised characteristic of nine-night singing and takes on an added poignant, echoing quality when heard all through the night, from far off, over plains and hills," wrote Baxter.

"In nine-night singing, the concepts of harmony with Jamaican folk singing can be observed without much difficulty," added Baxter.

Departing from hymns, mourners would burst into singing choruses, which were well known, and need no tracking. They were sometimes accompanied by instruments and handclapping.

"These choruses ... (were) generally faster and brighter and provide relief from the concentration of effort for the 'lined' hymns," explained Baxter.

Jamaican folk songs were also major part of the repertoire of nine-night singing, especially those with a religious undertone. The irreligious ones and those replete with social commentary and double entendre were very popular. They were catchy and easy to follow.

"The most common type of Jamaican folk songs consists of a verse of two or three lines for a solo singer, with a repeated chorus or refrain which can be sung by everybody," said Baxter.

Judy Drownded, Woman tory long, Dinah, Sly Mongoose, Chi chi bud, oh, Hosanna, Hog inna mi coco, and Emmanuel Road are a few on the long list of folks songs that people used to have fun with at set-ups, where the tempo was set by the band.

Singing at set-ups of yesteryear was accompanied by lively bands. All over the country bands playing a variety of folk and religious songs were a staple at nine-nights, which were social gatherings. People were not always in attendance because they were mourning. They were there to meet, greet and be entertained.

"This ceremony is participated in not only by the resident family, but also by those who have emerged into the wider world (migrated), who often return to attend. Some of these throw themselves into the whole affair, singing and helping to pass around the tea and bread," said Baxter.

Invariably, people looked forward to the music to carry the night. And they would express their displeasure if the 'vibes' were not encouraging.

They knew what to expect, and if they were not getting that they would rant. Some bands developed a favourable reputation and would travel far to 'dead yards', where their presence was requested.

And in some traditions like the Dinkie Minnie and Kumina, skilled dancers would mesmerise onlookers, who are sometimes pulled into the circle by the electrifying aura of the occasion, where feasting is also a major part of the ritualistic equation.

In the traditional Jamaica set-up, fried fish, hard-dough bread, bammy, pudding and other pastries were served with coffee or chocolate tea. But there were also soups, curried goat and rice, as the process evolved.

Rum was a given. It was a libation for the soul, the body and the arts of singing, drumming and dancing. At the set-up, the rum kept the spirits alive.