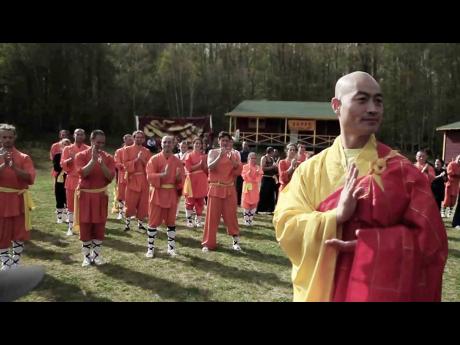 Sifu Ming and some of his disciples. 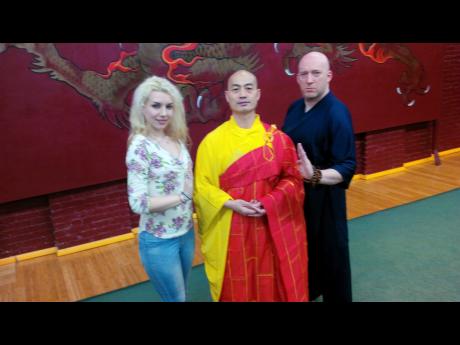 Shaolin monks are generally associated with incredulous displays of martial arts. But somewhere along the way, the meditative aspect of the art has been marginalised.

Sifu Ming credits a Shaolin Temple in China with saving his life from an incurable ailment when he was five years old. "My mother took me there when all hope for a recovery was dashed. Just setting foot there changed my life," said Sifu Ming.

He remained at the temple, trained, eventually following the footsteps of a revered lineage of teachers. His youthful countenance, boyish self-assurance and comedic gestures belie his command of dialectics and his impressive grasp of Occam's Razor (the principle that the simplest answer is correct to a complex question).

His stature as a 34th-generation Shaolin master cements his accomplishments.

Life, he opined, is a celebration. "Every day is Christmas Day," he oftentimes repeated with alacrity. In many ways, Sifu Ming has bucked the trend, turning the image of the stoic, reserved and ascetic monk on its head.

"My mission," he offered, "is to spread knowledge, love, and peace through mind-to-mind and heart-to-heart encounters."

He described Chan Buddhism as "everything and nothing". It is all-encompassing. "We practise Chan Buddhism or meditation when we are walking or talking ... when we are involved in any activity. It is a natural act."

He decried teachers who insist that a particular asana (posture) has to be adopted when meditating. "We are all different. Some of us cannot sit with our legs folded. You may prefer to sit or lie down. We must always be at ease so we can use the natural energy within us to our benefit."

Sifu Ming elaborated on the concept of nature's natural rhythm, referring to babies and children who are never thought how to breathe. "Children can horse around forever yet they always get their breathing right without having to think about it. Why then should we be lectured on breathing techniques?" he asked. "The mind should be free," he added. "Never over-think. Don't try to control your thoughts when meditating. Just let them flow."

Sufi Ming views thoughts as determinants of our destiny. "We hold our present state and future in our hands. We create or destroy ourselves by our own thoughts." It is a philosophy that has spanned the ages.

"If you believe in Buddha, he exists, if you don't, he doesn't," he argued. "The same goes for believers in Jesus. We create our own gods and devils. I have no fantasies or opinions of the afterlife. I believe in this moment. I live to do good now. Help yourself; help others, help the world.

"If I reincarnate or exist after I die, that's fine, but I'm equally comfortable not existing. Fast living will destroy you; eat and sleep well; exercise because a sharp blade rusts without use; challenge yourself; don't ever make excuses; every day is Christmas Day."

Since moving to the United States in 1992, this celebrated monk has established the most sought-after temple in New York City and has purchased property in upstate New York for spiritual retreats.

He has also worked tirelessly to demystify ancient Chinese teachings.

"The greatest weapon that Shaolin monks teach is that of peace. In fact, what appears harmless can be the deadliest of weapons," he said, pointing to the pen in my possession.

"The Shaolin discipline is always defensive. It is never used to kill ... that explains why the staff is the most popular of weapons. We disable opponents so that when they recover they will realise the folly of aggression. We give them time to reflect. Martial arts is meant to protect and save lives."

Many westerners in Sifu Ming's fold have become monks. "One can take five days or 50 years to attain that status," he noted. He cautioned, though, that wearing a robe and shaving one's head do not make a monk.

"It's all about understanding who you are. This is essential. You must respect yourself and others; you must have the ability to teach others to live harmoniously with nature."

'Sifu,' as he is affectionately called, scoffed at prescribing strict dietary guidelines for monks. "What goes into your mouth has no bearing on your wisdom, humility and selflessness. Quite frankly, the beggar or someone who lives on the street can be a more accomplished monk than many who live in temples."

Sifu Ming's compelling philosophy has already borne fruit in Trinidad. A vibrant Shaolin Temple was recently founded in the central district of Couva.

And his Caribbean outreach is gaining momentum. In 2012, he conducted workshops in Negril, Jamaica.

His eyes are set on establishing a temple there within the next couple of years. His disciples were clearly excited about the prospects. So is Sifu Ming. "We are determined to make this venture a success."

- Dr Glenville Ashby is the president of Global Interfaith Council.